On August 27, 1664, the English captured New Netherland from the Dutch. The Treaty of Breda, signed in 1667, brought an end to the Second Anglo-Dutch War and formalized the transfer of New Netherland to English control. Within the next decade, the territory’s geographical boundaries would be continuously modified, creating new territories like New Jersey.

Under the leadership of Colonial Governor Thomas Dongan, who served from August 1683 to August 1688, New York was formally restructured and divided into twelve counties on November 1, 1683. The County of Dutchess was named after the Duchess of York, Mary Beatrice d’Este, the eldest child of an Italian Duke. Two years later, in 1685, the Duchess would be crowned Queen consort of England. However, her reign was short lived; her husband, King James II, was soon deposed during the Glorious Revolution.

Up until this time, New York’s main export was fur, a quickly declining industry. Throughout his time in office, Governor Dongan strived to turn the sparsely populated province into a crop producing territory. During his years in office, Governor Dongan granted vast land grants, called patents, to entrepreneurial individuals in the hope that they would most rapidly be able to populate and cultivate the lands. 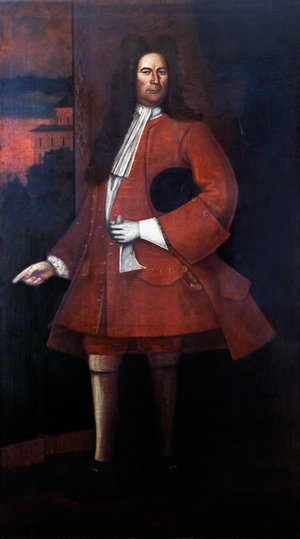 Courtesy of the Albany Institute of History and Art.

Colonel Pieter Schuyler was one of these individuals. On June 2, 1688, Schuyler acquired a land patent that encompassed two vast tracks of land, one near Red Hook and the other near Poughkeepsie. Schuyler’s first tract included the territory of today's Bard campus. The original deed surveys a land, in part, familiar to us:

"on the east side of Hudson's river in Duchess county, over against Magdalene Island, beginning at a certain creek called Metambesem [now the Saw Kill]; thence running easterly to..."

What's a Mill? →
The County