Campana urns, particularly of the simple, not overly ornamented variety, were praised by  Downing (1815–52). In an 1848 issue of The Horticulturist, he cited a statement by J. C. Loudon (1783–1843), a noted, early 19th-century English garden expert. Loudon wrote, “The history of every country may be traced by its vases.” Downing, whose influence lasted well into the 20th century, extolled the virtues and uses of ornamental vases, noting, “There are few objects that may, with so much good effect, be introduced into the scenery of pleasure grounds, surrounding a tasteful villa, as the vase in its many varied forms.” 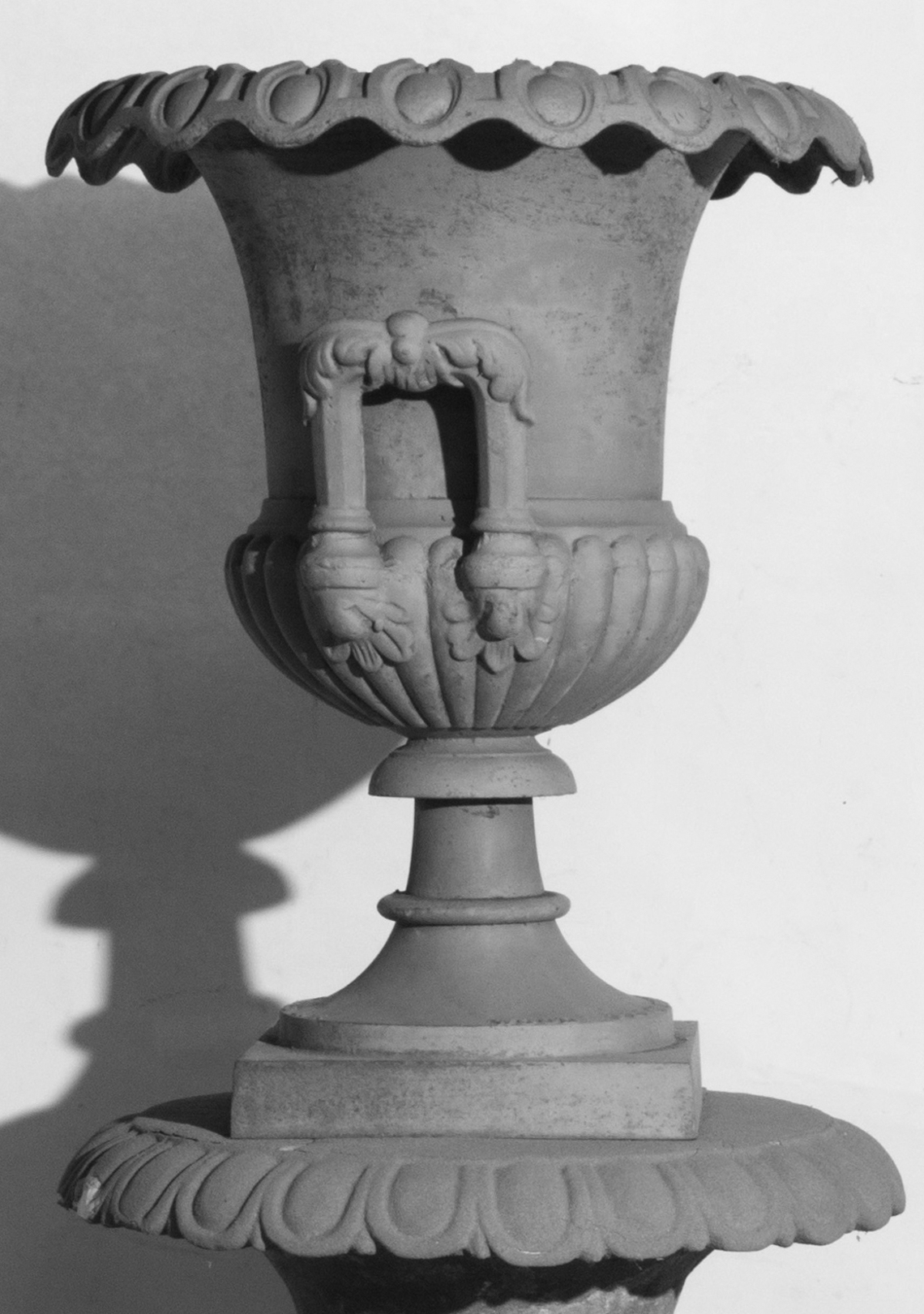 Even the most standard Victorian-era urns had multiple variations. This pair is a
riff on the classical campana (bell-shaped) urn. The scalloped rim, with its modified
egg-and-dart motif, invites a comparison to flower petals, an effect emphasized by
the handles, which are embellished with a touch of foliage.

The Philadelphia blacksmith and iron founder Robert Wood, who established his business on Ridge Road in 1840, was one of the most productive and influential of all the American makers. For the first decade, Wood produced stoves, pipes, and other utilitarian objects, but by 1850, he was manufacturing decorative items including ornamental railings, veranda components, pier and center tables, settees, chairs, tree boxes, and hat stands. By 1858, Wood had partnered with Elliston Perot, and was operating as Wood & Perot.

In 1859, an expert on Philadelphia manufacturing, Edwin T. Freedley, noted that “most of the cemeteries and public squares throughout the whole country are adorned by work executed in Philadelphia; and every city, probably every town in the Union, contains some specimen of our manufacturers’ skill and trade.”

While there were plenty of important cast-iron makers in New York, Boston, Detroit, and other cities, the heart of the cast-iron industry was in Philadelphia. Wood’s output and reach were unmatched. In 1858, Wood & Perot had installed sales representatives
across the country, seeking new avenues of expansion. The fact that early Wood &
Perot urns are installed at Montgomery Place is another example of how in step the
estate’s owners were with the latest fashion in garden ornament. 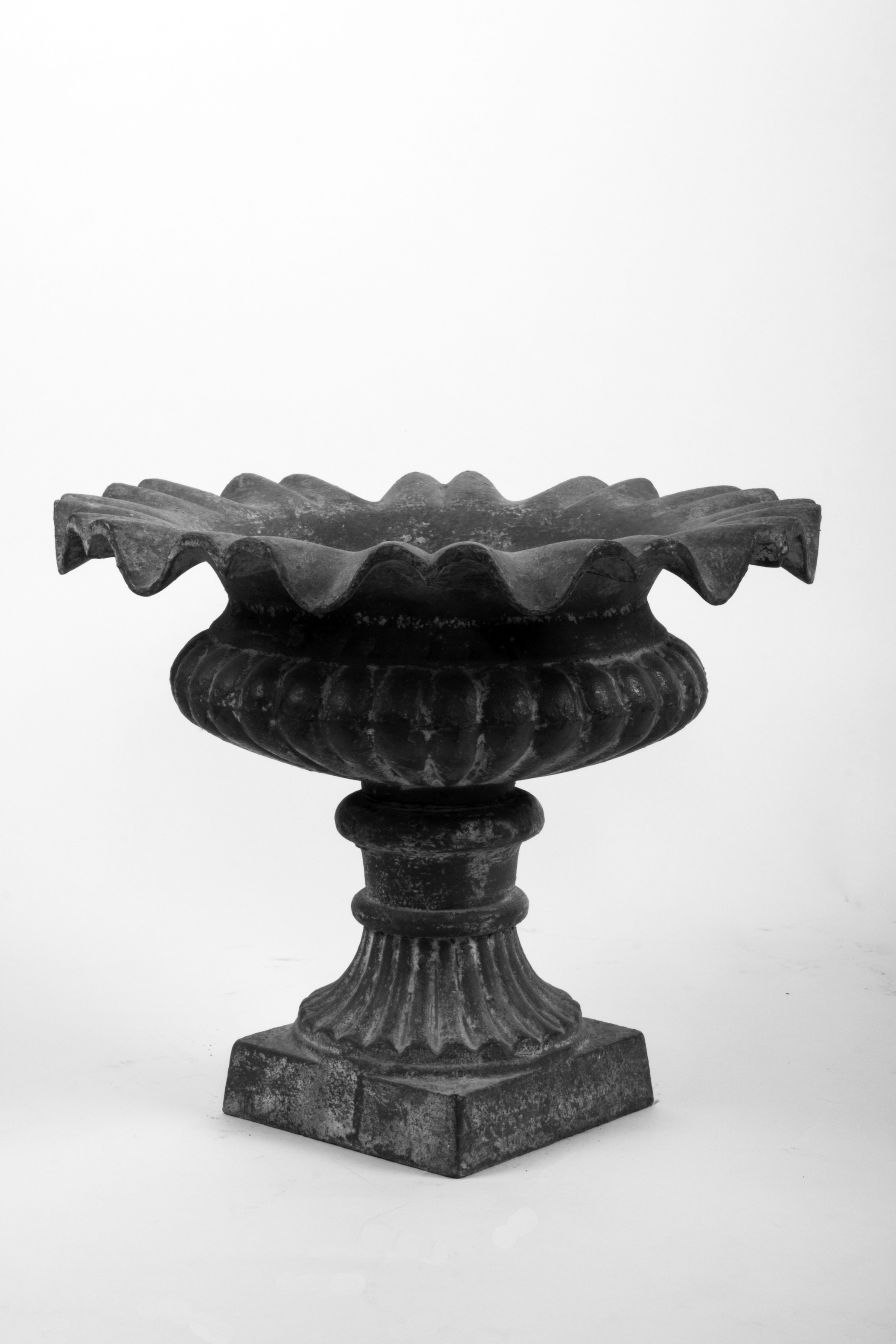 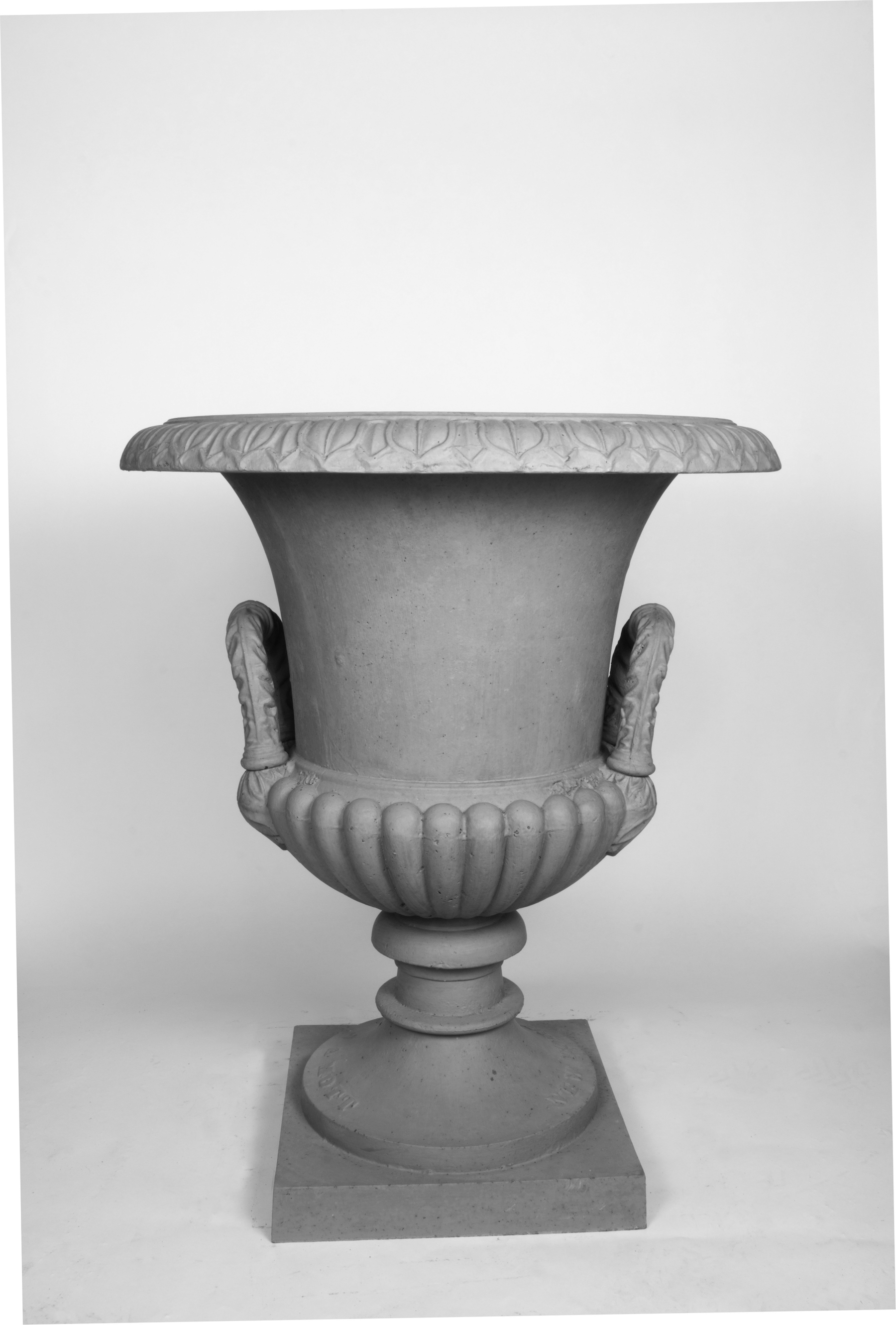 This style of urn was one of the most commonly produced by 19th-century foundries. The basic shape recalls the ancient Greek calyx krater, a vessel used to dilute wine with water. More specifically, these urns resemble the form of two bell-shaped kraters from antiquity: the Borghese Vase and Medici Vase, dating to the 1st century BCE and the 1st century CE, respectively.

Multiple variations of the standard campana urn were produced by a large number of American and European foundries, including J. L. Mott of New York City. The J .L. Mott Iron Works, one of the most successful and prolific of all American foundries, was established by Jordan L. Mott (b. 1799) in 1828. The foundry was located in the Mott Haven section of the Bronx, with additional showrooms in Manhattan.

In the mid-19th century, the New York City-based firm Ambroise Tellier produced
terra-cotta statuary, urns, fountains, and decorative architectural ornament, in addition to a full line of terra-cotta bricks, tiles, and slabs. According to The Horticulturist, Tellier was an Italian artist who emigrated to the United States, establishing an atelier at 1194 Broadway in New York City. The Horticulturist wrote that Tellier’s terra-cotta material was “perfectly adapted to a northern climate, being as durable as brick.”

Although published after Downing’s death, the editors undoubtedly would have followed his tips on proper placement by suggesting that urns as formal as these be displayed close to the house or other architectural structure (whereas more rustic ornaments would require a more naturalistic setting). 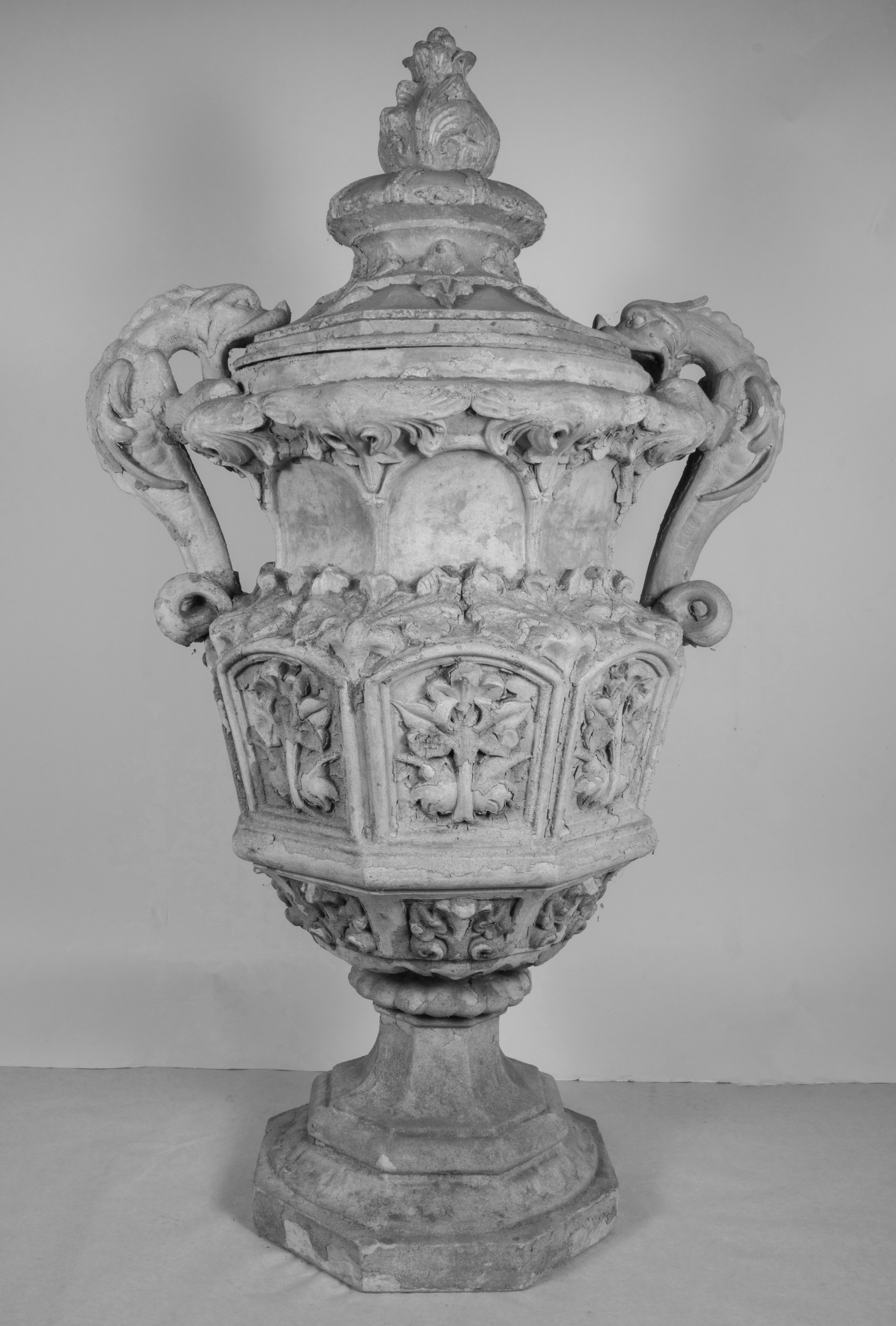 The design for this urn appears in an 1856 catalogue by the French maker Gossin
Frères, and the Montgomery Place pair could have been imported from France. However, since New York City maker Ambroise Tellier reproduced several designs from Gossin Frères’s (and other French makers’) catalogues, and because we know that a statue marked “A. Tellier” is in the Montgomery Place collection, it is reasonable to think that he produced these urns. This type of urn can be used year-round. In warm weather, the lids are removed, and the urns planted. During less temperate months, lids keep ice and snow from collecting in the interiors of the urns. 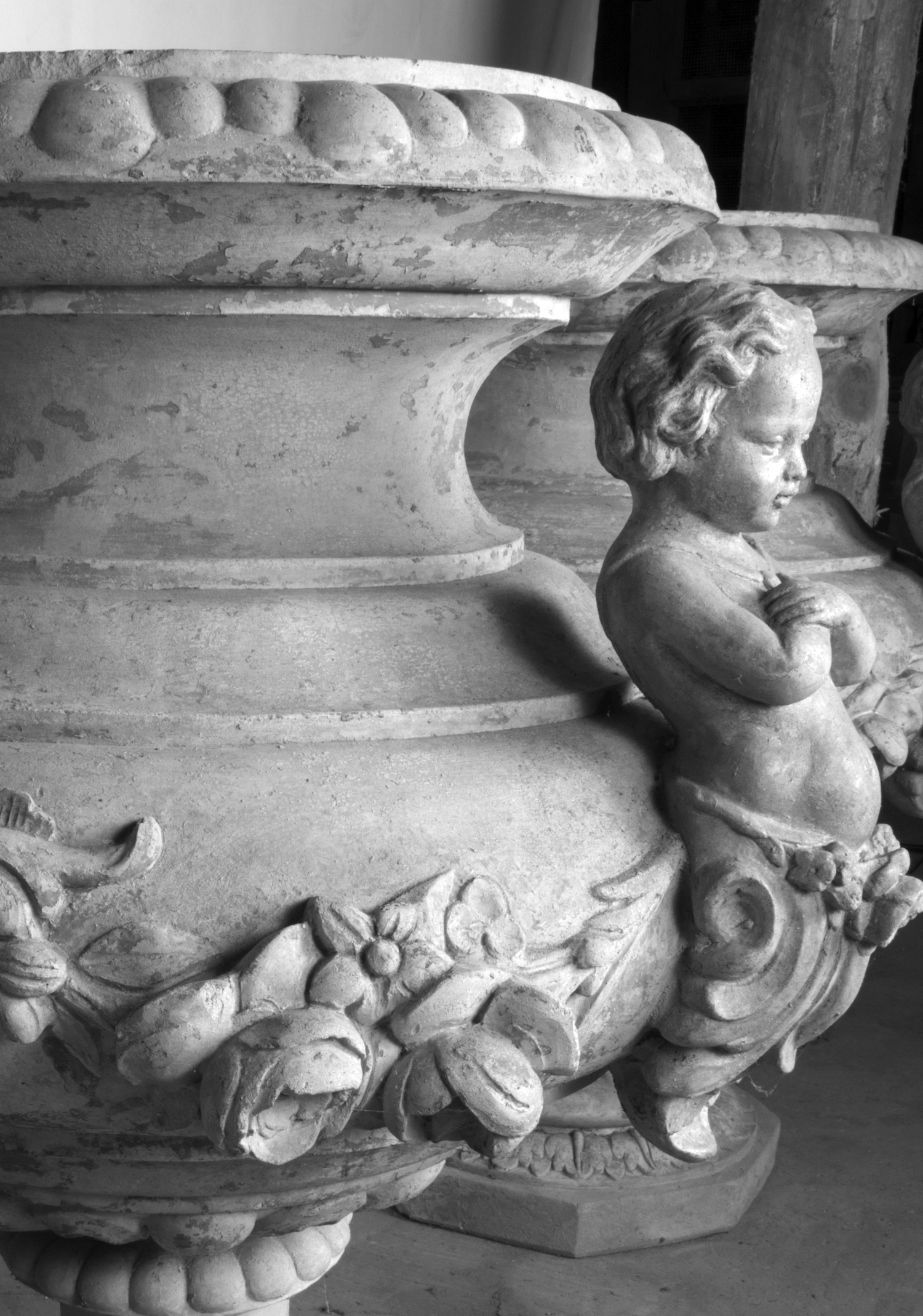 As was the case with many American garden ornament manufacturers, Tellier borrowed heavily from the pattern books of European makers. This urn is pictured in the 1856 catalog of French maker Gossin Frères. The design of this particular urn was shown in an 1859 issue of The Horticulturist.