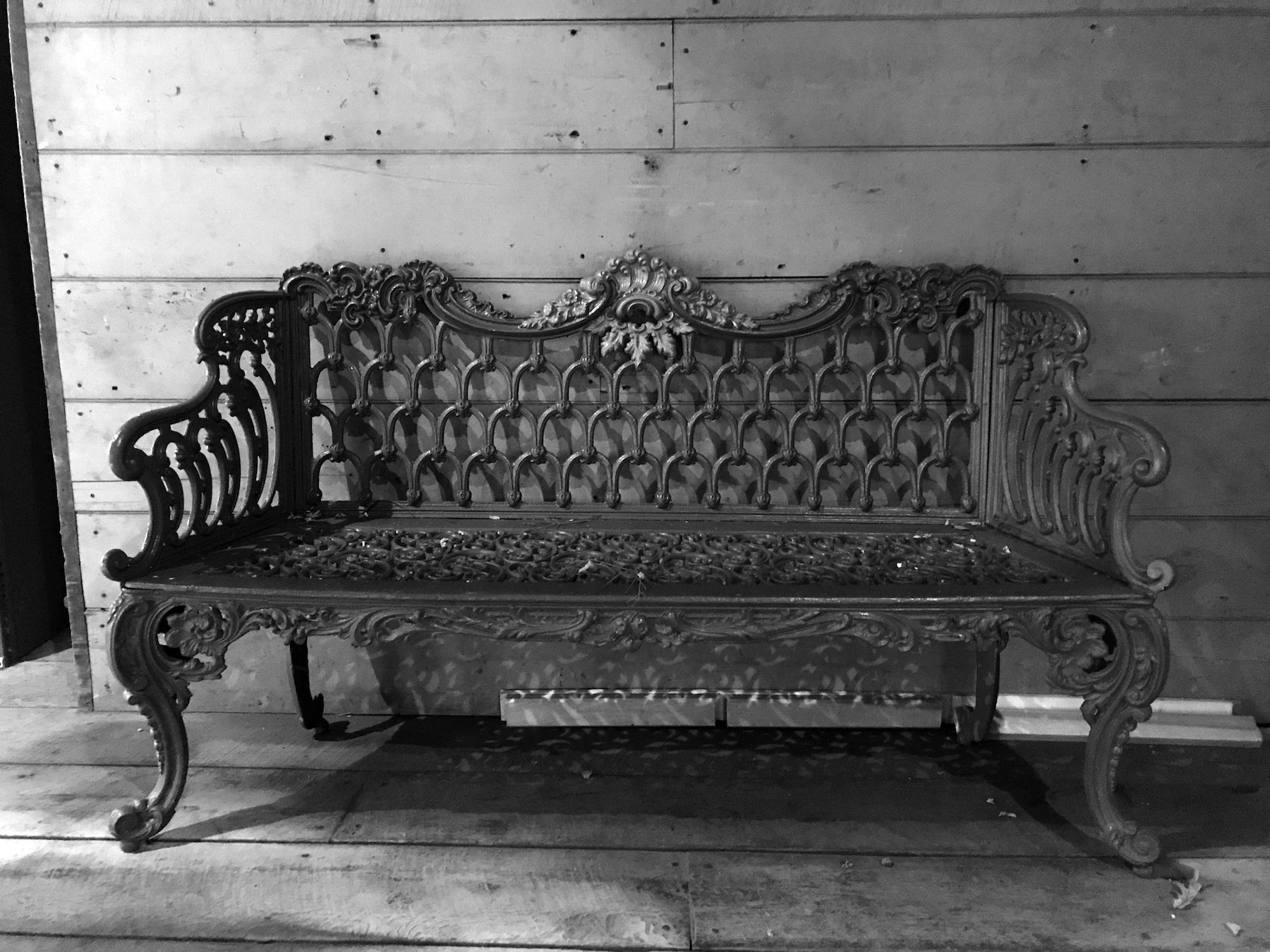 The design of this settee, known both as “Rococo” and “Gothic,” was patented in Great Britain in 1846 by the Carron Company of Scotland. By the 1850s, several American foundries were making this pattern, including Janes, Beebe & Co.; J. L. Mott Iron Works; and J. W. Fiske Iron Works, all of New York City; and the Stewart Iron Works of Cincinnati.

Although mainly Rococo Revival in aesthetic, the arched hoops on the back are more closely related to the Gothic Revival style. Consequently, the settee is described as “Rococo” or “Gothic” in period trade catalogues. While the original Scottish version had a straight back leg, the American version differed in its use of a curved, or cabriole, back leg. 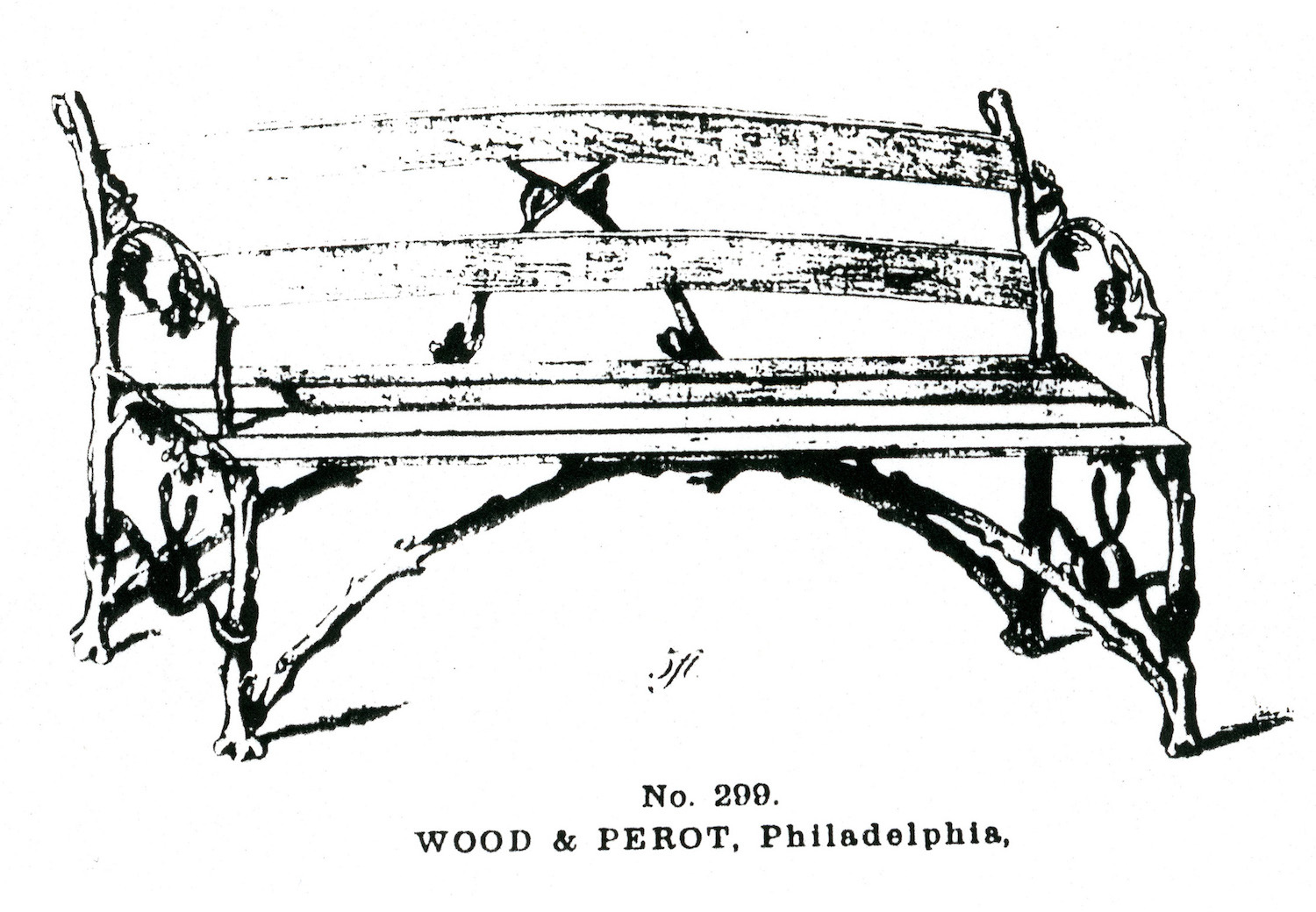 This bench was manufactured by a variety of American and European makers. It appears in the 1858 catalogue of Wood & Perot, a prominent Philadelphia-based manufacturer. 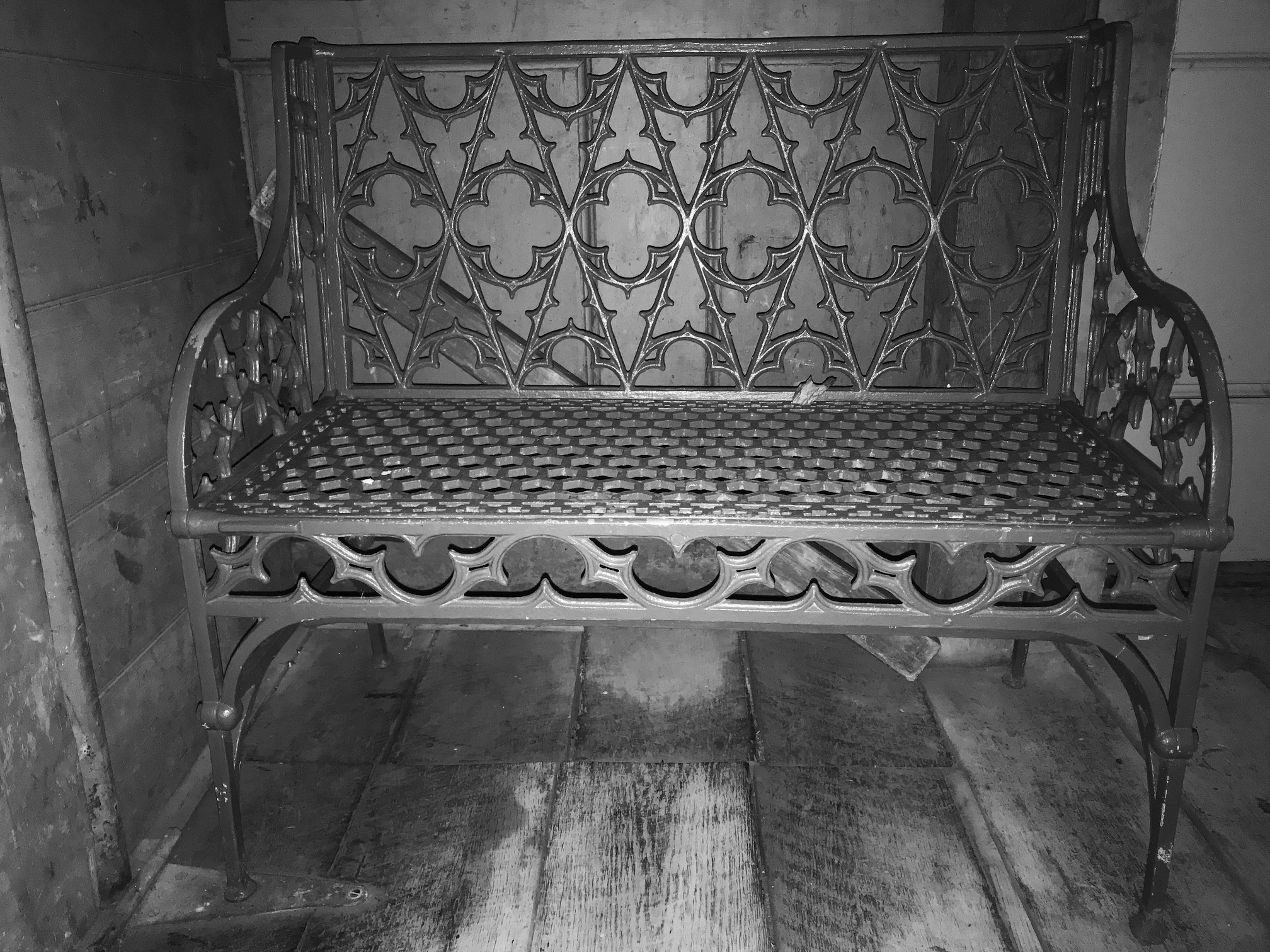 This pattern is thought to have been first cast around 1842 in Rotherham, England,
by James Yates, and later copied by the Val d’Osne foundry, which was in business
near Paris after 1833. A design for this seat is illustrated in the 1858 Barbezat & Cie
Founderies du Val D’Osne catalogue, under Bancs de Jardin (garden benches), plate
135. The only American company known to have offered it was Janes, Kirtland &
Co. of New York City in its 1870 catalogue.

The Federal-style Mansion House at Montgomery Place was completed in 1805
under the direction of Janet Livingston Montgomery. It was redesigned in the
Classical Revival style in 1840, and again in 1860 by renowned New York City
architect Alexander Jackson Davis (1803–92). While Montgomery Place was not
designed in the Gothic Revival style, it makes sense that a suite of Gothic Revival
furniture was used in the garden, since Davis was one of the foremost practitioners
of the style (an excellent example is Lyndhurst, Davis’s 1838 masterpiece built for
Jay Gould, located in Tarrytown, New York). 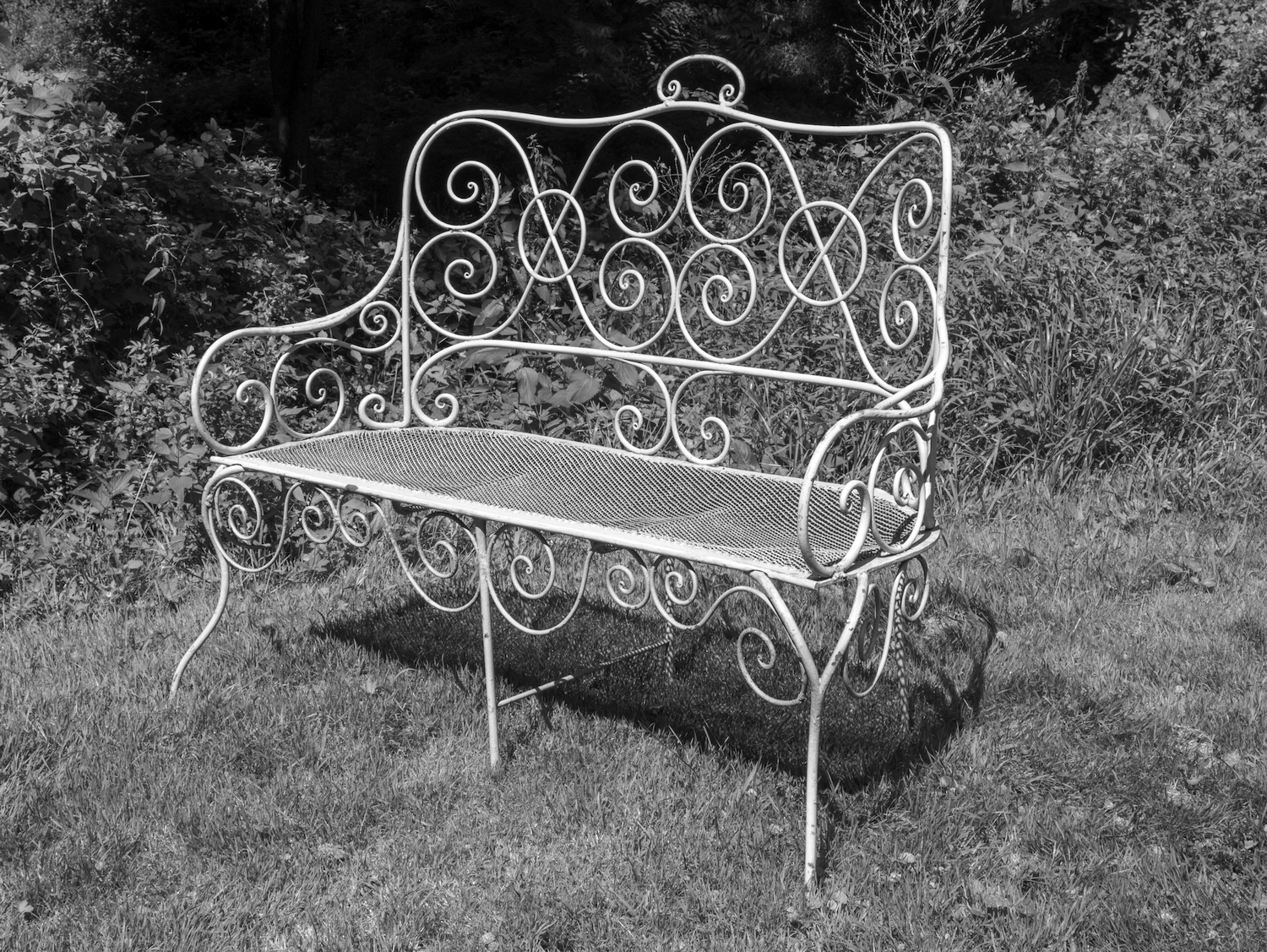 The date of this suite is debatable. Companies produced similar wrought iron and wire pieces in the 1850s and 1860s in both France and the United States: a comparable side chair appears in the ca. 1858 catalogue of Parisian maker Barbezat & Cie; several related chairs show up in the ca. 1870 catalogue of French maker Société Anonyme des Hauts-Fourneaux & Fonderies du Val d’Osne (known as Val d’Osne); and in an 1857 catalogue, the New York Wire Railing Company offered wirework chairs that were akin to the French models (though not as elaborate). The curved leg (not quite cabriole, but in the spirit of the Rococo Revival), also point to a ca. 1860 date, plus the fact that the bulk of the ornament at Montgomery Place dates to the mid-19th century.

However, a later date cannot be ruled out, as wrought-iron furniture was enormously popular in the 1930s, and both French and American makers were producing high-quality, whimsical pieces at that time. These could also have been custom made by a craftsman, as they have an individuality unmatched by many suites of either the 1860s or 1930s. 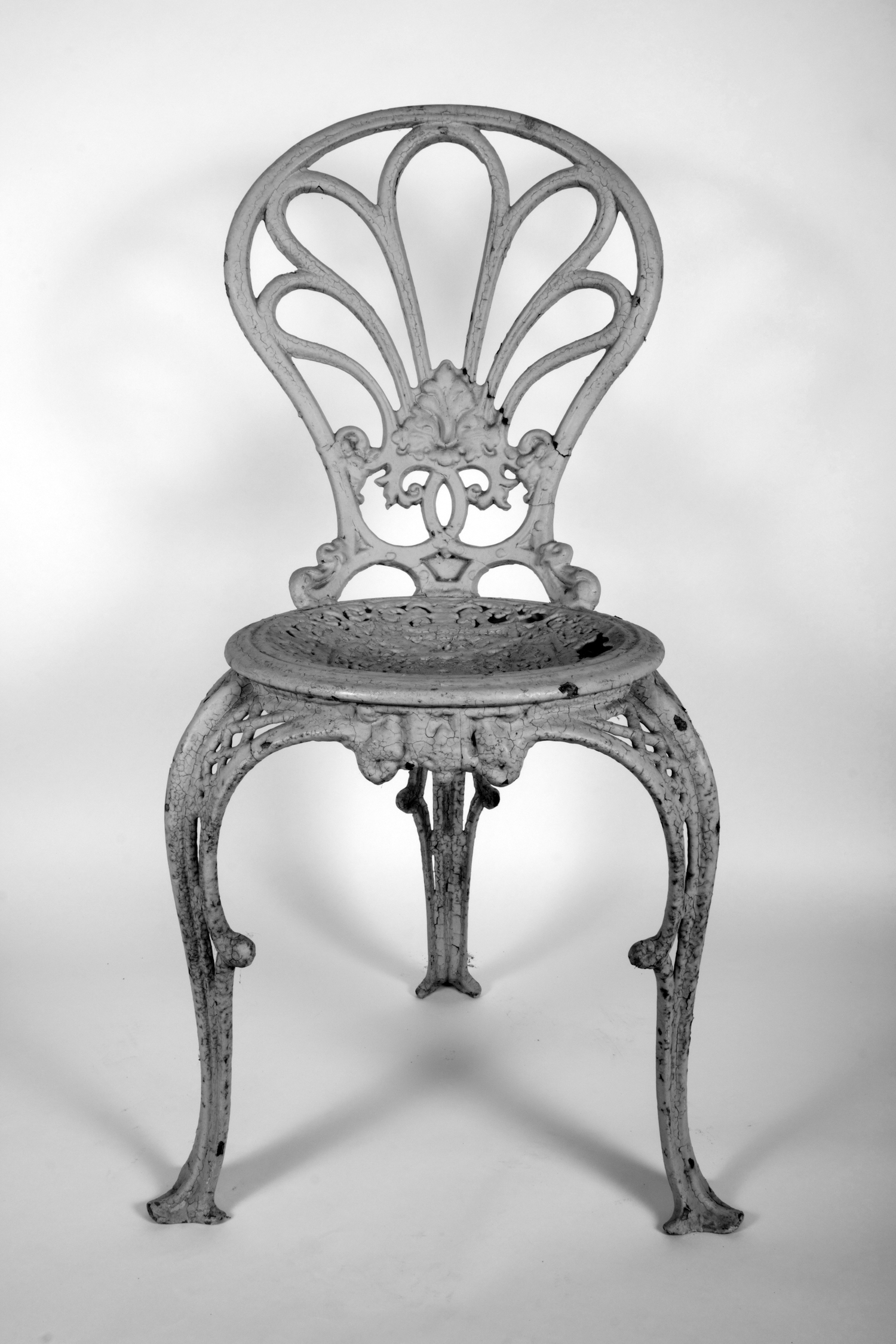 This style of chair was produced by many American makers, including J. W. Fiske
Iron Works, J. L. Mott of New York, and Robert Wood of Philadelphia. 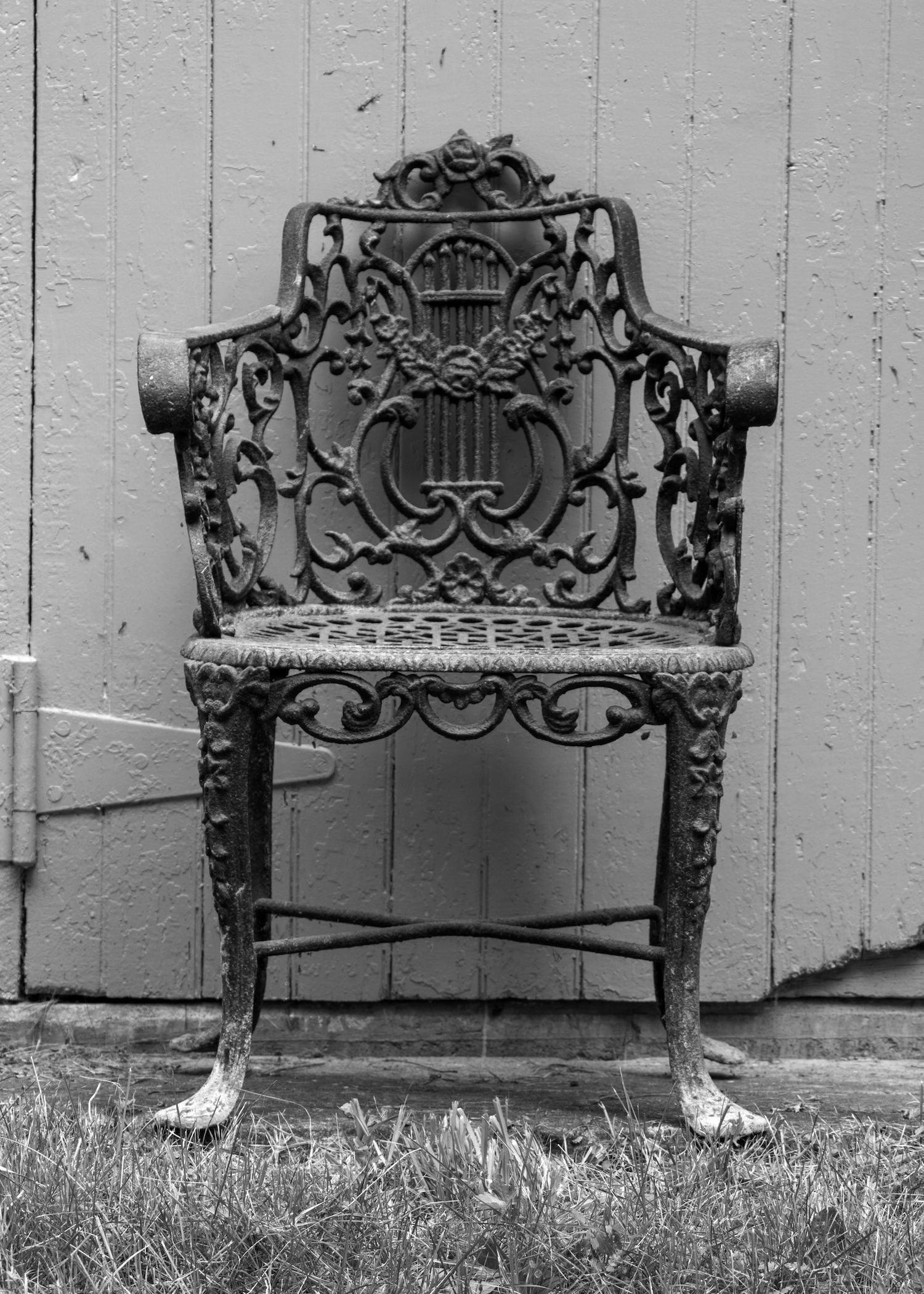 The Philadelphia blacksmith and iron founder Robert Wood established his
business on Ridge Road in 1840. He first produced stoves, pipes, and other
utilitarian objects, but by 1850, he was manufacturing decorative items including
ornamental railings, veranda components, pier and center tables, settees, chairs, tree
boxes, and hat stands. By 1858, Wood had partnered with Elliston Perot, and was
operating as Wood & Perot. The design of this chair appears in Wood & Perot’s
1858 catalogue titled Portfolio of Original Designs of Iron Railings, Verandahs, Settees,
Chairs, Tables, and Other Ornamental Iron Work. (Wood probably did not produce
a catalogue prior to 1858, when he partnered with Perot, since Edwin T. Freedley
noted in an 1859 book on Philadelphia manufactures that Wood had just issued
his first illustrated catalogue. However, Wood was clearly producing this chair prior
to the catalogue’s publication, since it is marked “Robert Wood” and not “Wood
& Perot,” or “Robert Wood & Co.,” as were later versions.) Many designs in the
1858 Wood & Perot catalogue are copies of English and French patterns, but a few,
including this armchair, seem not to have had European precedents, and have a
distinctly American design.