In the second half of the 19th century, the popularity of gardening and
horticultural pursuits prompted more homeowners to build conservatories and
greenhouses, creating a market for hanging baskets. The open structure of the wire
basket allowed for easy drainage, and the lightweight, yet strong, material made
them functional for everyday use.

Beginning in the late 1850s, technological improvements led to the proliferation and popularity of wirework garden ornaments. Wirework furniture, baskets, plant stands, and the like were manufactured by such makers as the New York Wire Railing Company (founded by John B. Wickersham) of New York City, M. D. Jones and Parker & Wood of Boston, and E. T. Barnum of Detroit.

Wirework, or “woven iron,” as described in the New York Wire Railing Company’s 1857 catalogue, was celebrated for its lightness and malleability, combined with durability. According to the same catalogue, the strength of wirework was due to the “process of crimping and weaving bars and wire of any size. The plan of crossing wires is so contrived that each binds the other, giving support to every part of the structure.” Wirework ornaments also lent themselves to fanciful, intricate designs, often mimicking the curved and scrolling forms of the Rococo Revival taste that was popular in the mid-19th century.

Manufacturers like Wickersham made the most of wirework’s popularity by producing settees, tables, chairs, and, of course, a plethora of plant stands to satisfy customer demand. 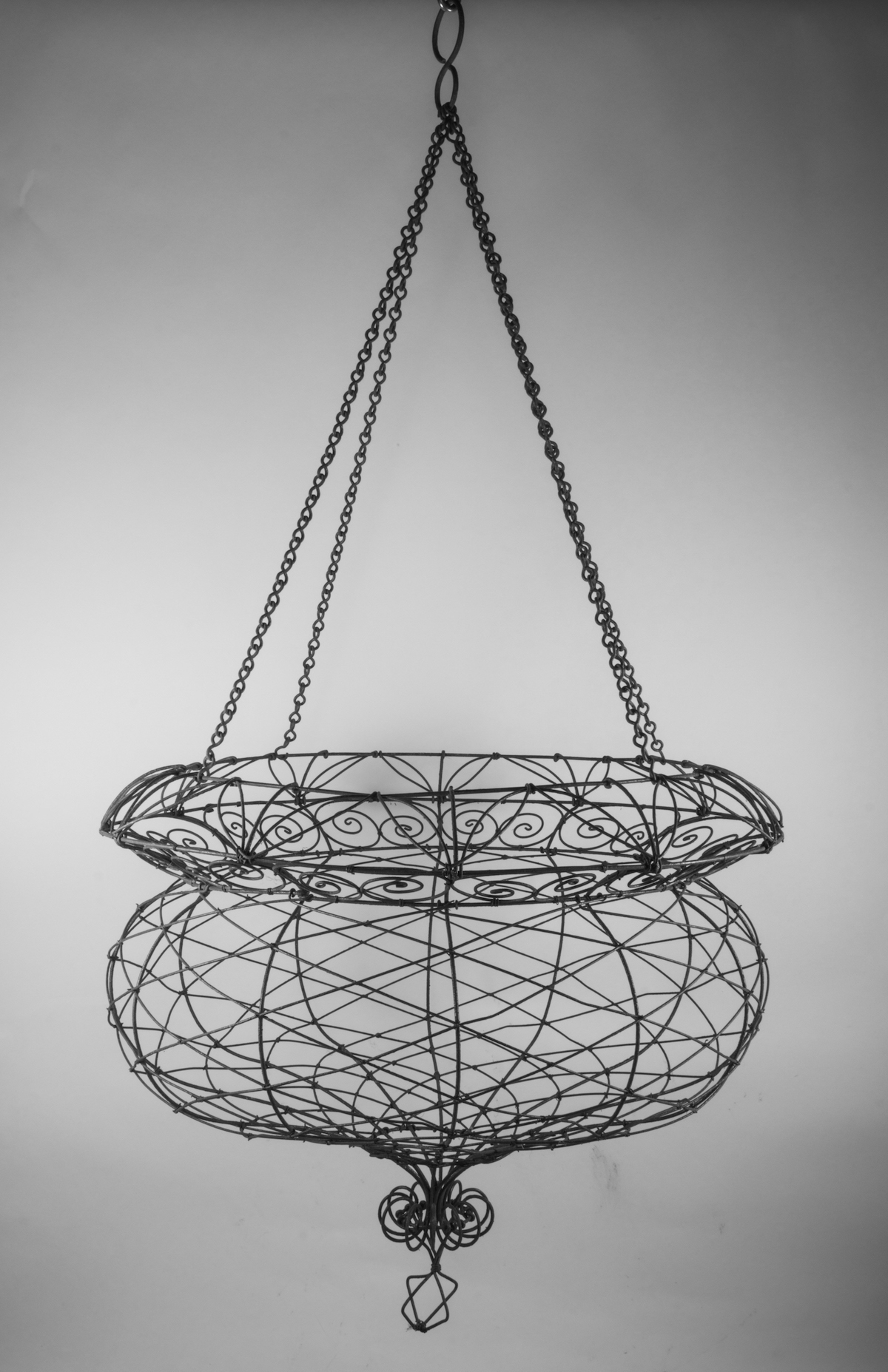 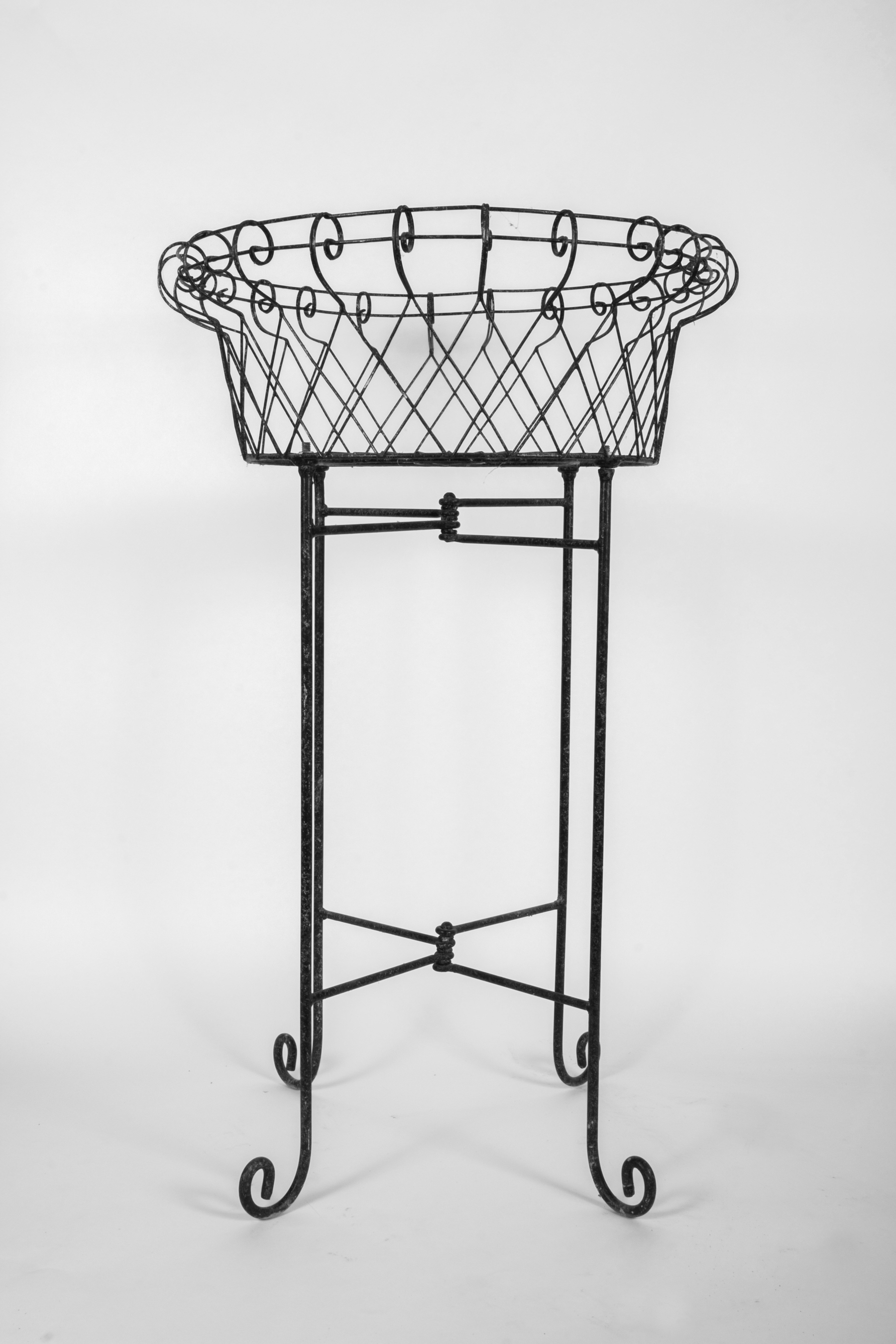 One of the cherished objects of the materialistic Victorian age was the plant stand, which provided a link between house and garden as well as practical storage space for horticultural specimens (horticulture being a preeminent fascination of the era). In 1841, Humphrey Repton (1752–1818), the influential English garden designer, and Jane Loudon, wife of the landscape expert J. C. Loudon (1783–1843), were each credited with introducing wire flower baskets into English gardens, though they had been advertised as early as 1839, by English maker John Porter. 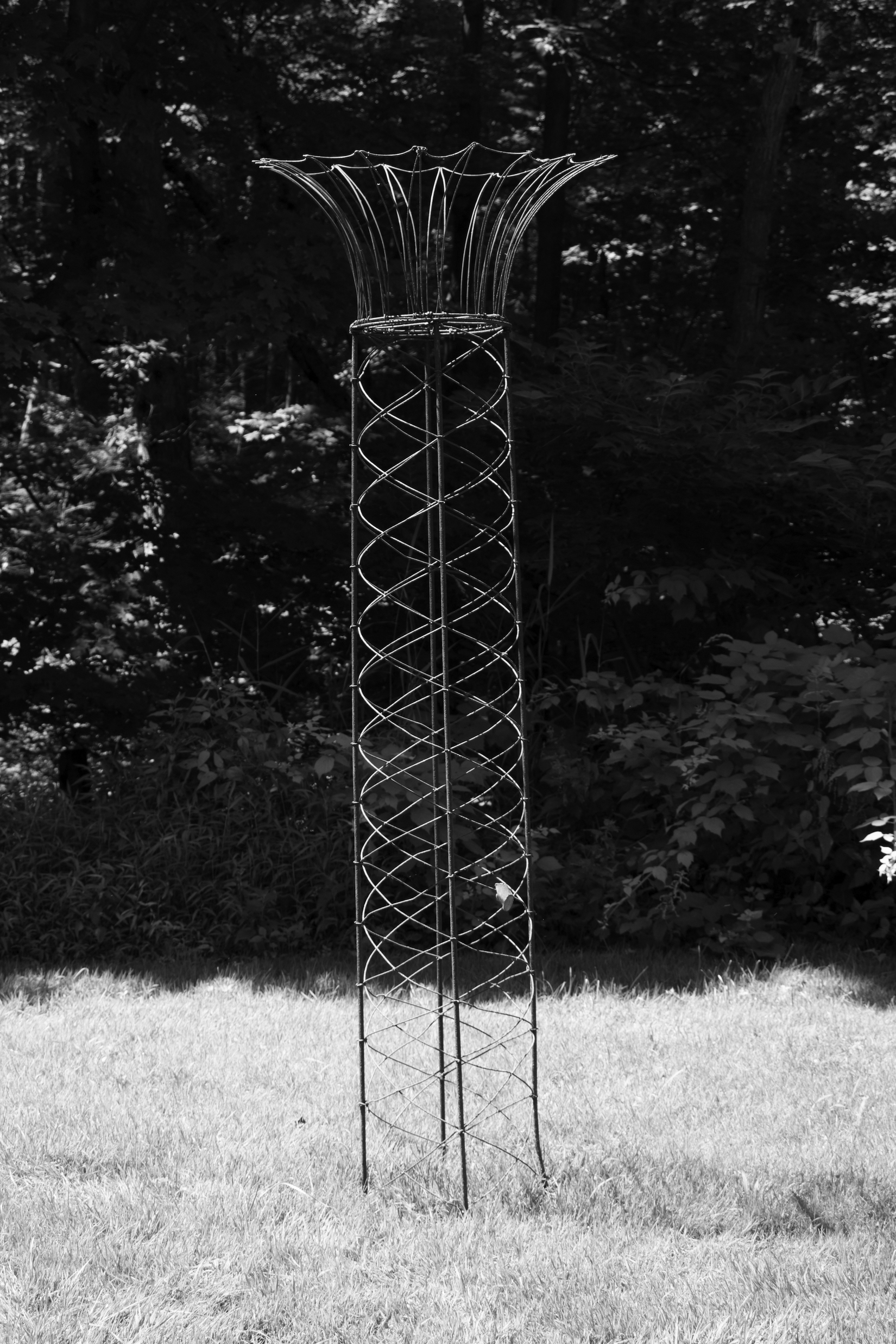 This trellise—so simple in design as to appear almost modernist—reflects the trend for wirework garden ornaments in the latter half of the 19th century. Their lightness made them easy to move around and store. It also made them unobtrusive, and they became “invisible” supports for prized horticultural specimens. 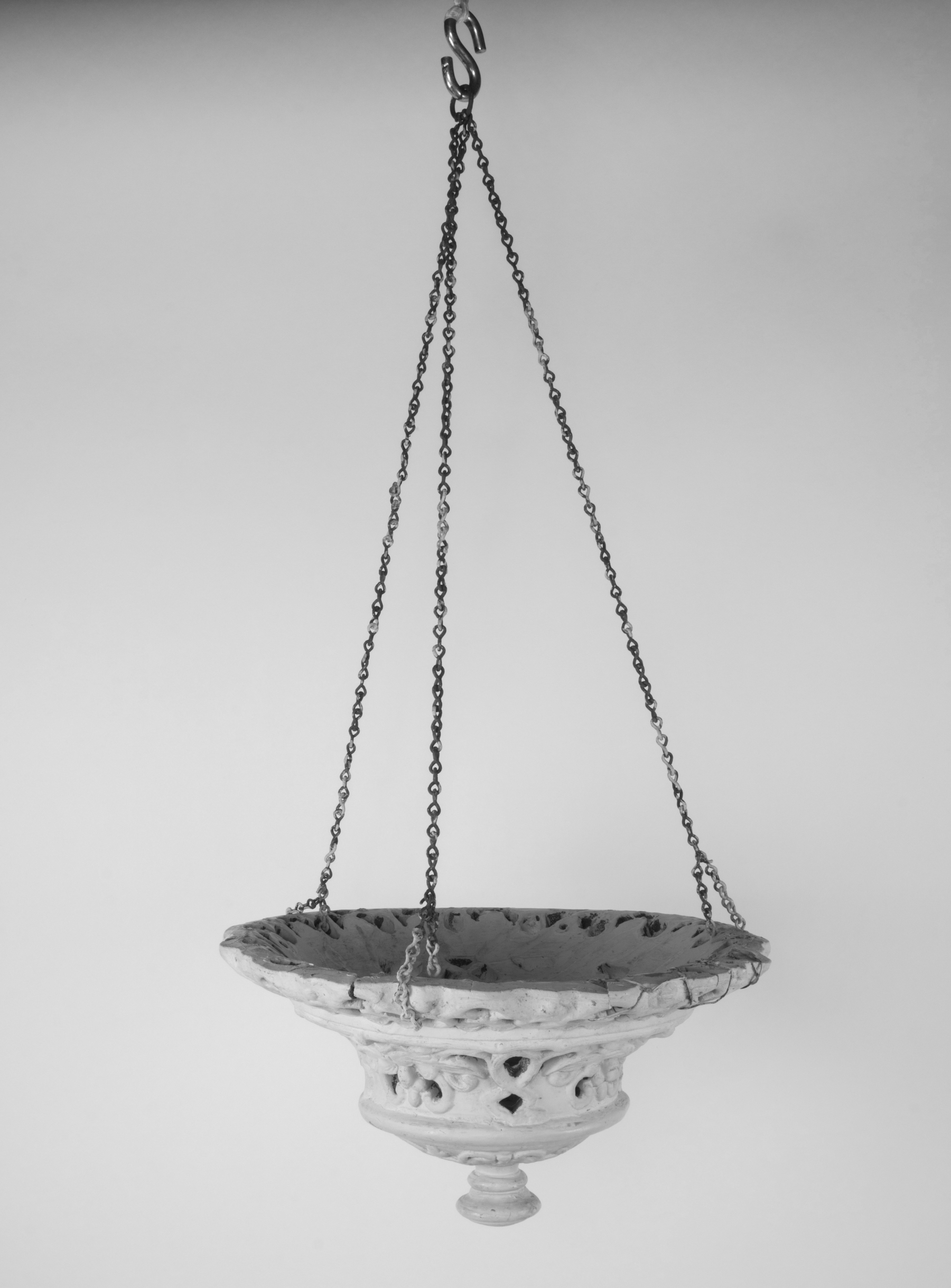 This type of hanging terra-cotta planter was manufactured by such American makers
as Parker & Wood of Boston (established in 1845, operating until at least 1892) and
Galloway & Graff of Philadelphia (appearing in a Galloway & Graff catalogue [ca.
1876] but not in the early 20th-century catalogues of the later Galloway Terra-Cotta
Company). These examples were probably manufactured by New York City maker
Ambroise Tellier, since his mark is stamped on another item at Montgomery Place.

The popularity of hanging planters speaks to the Victorian-era penchant for botany
and horticulture—and the trend toward building conservatories and greenhouses,
where these planters were displayed. The pierced bowls provided for proper
drainage, and how better to show off varieties of fern and other trailing plant
specimens! We know that these hanging planters were used in the interior of the
Montgomery Place Conservatory (destroyed in 1880), because they are pictured in
a stereoscopic slide image from ca. 1850–63. 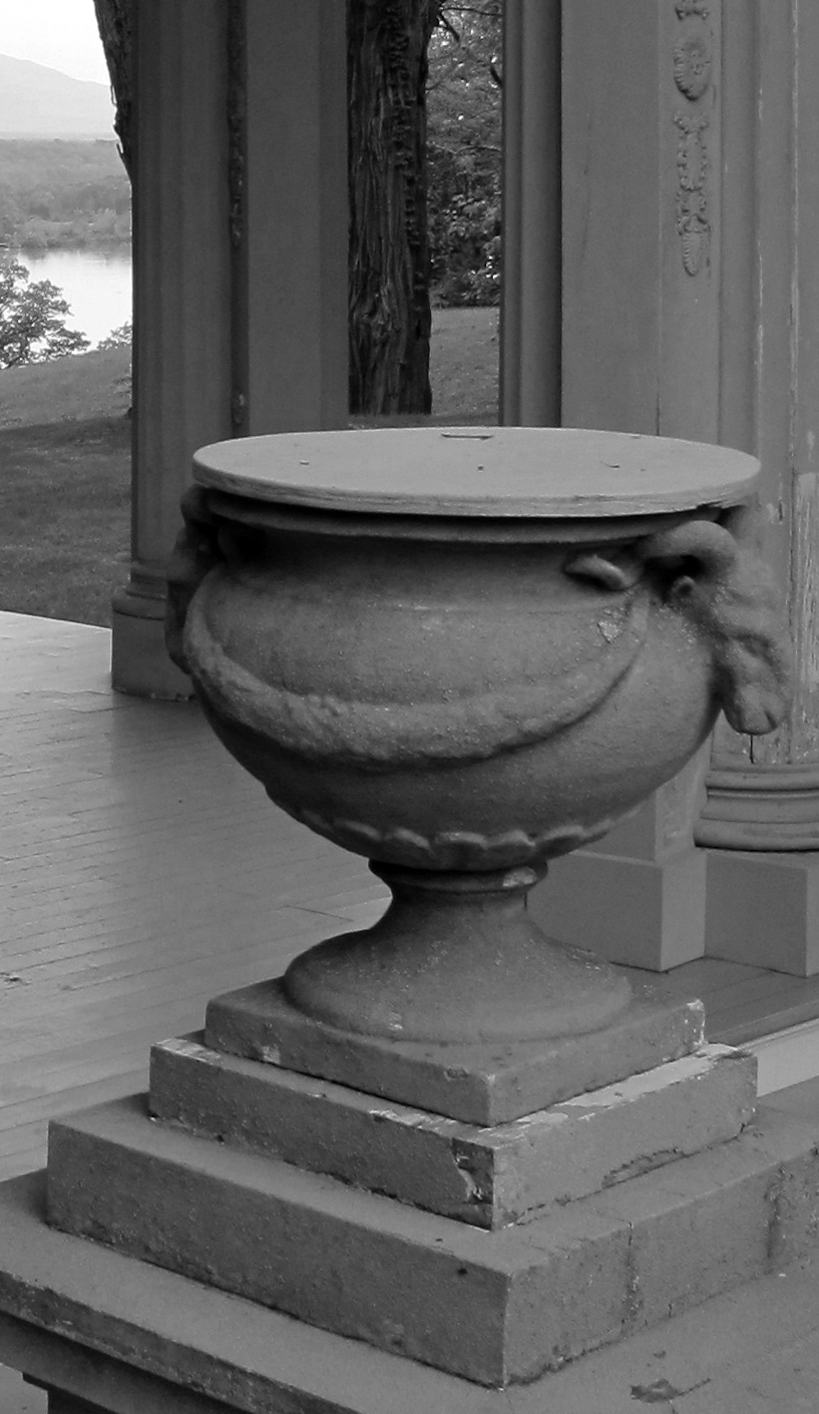 The planters on the porch balustrades were most likely manufactured by an American firm, and perhaps by Ambroise Tellier, the New York City terra-cotta maker that provided some of the statuary on the grounds at Montgomery Place. Installing planters at intervals along a balustrade or wall was a favorite design feature utilized by both Alexander Jackson Davis, the architect who redesigned the Mansion House in the 1840s, and by Andrew Jackson Downing, the landscape architect who advised on plantings.

In his seminal publication, A Treatise on the Theory and Practice of Landscape Gardening . . . (1841), Downing proposed that in order to decorate a terrace effectively, one should place “neat flower-pots on the parapet, or border and angles of the terrace.” Downing particularly loved plants with an austere, architectonic look. Indeed, he found that the most suitable specimen to occupy terrace pots was the “American or Century Aloe, a formal architectural-looking plant.” The agave plants in the Montgomery Place planters
were introduced by Thomas Barton (one of the owners of the property)—no doubt with Downing’s input—and have been continuously propagated since 1846.