Out with Fraternities, Out! 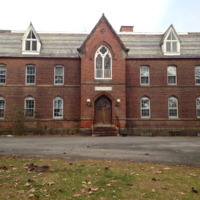 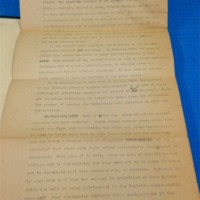 A Brief History of Eulexian Society.

Eulexian Society went through hard times during World War I. There were said to have been no members of the society left on campus after the draft and that essentially the fraternity dissolved in 1918. However, according to a handwritten note on typescript made on the "Brief History of the Eulexian Society," there was one member still left on campus, Brother Otis Lincoln Mason. The note states that Brother Lincoln would ascend the stairs of Aspinwall every Friday evening and conduct a meeting on his own in the Eulexian room where the fraternity had then held its meetings.

Courtesy of the Bard College Archives

In the fall of 1940, controversy struck Kappa Gamma Chi. A vote was taken among the members to gauge whether or not the fraternity should disband. Of the eleven members, six of them voted to disband the fraternity, four of them voted to continue, and one person abstained. This information was sent to James L. Whitcomb (class of 1914) who was then the president of the Kappa Gamma Chi parent organization, and he chose to respond to this issue by declaring the vote not binding. It was, he said a vote "of opinion" and not one that held much weight. It was also clear in the correspondence that Whitcomb was personally against the dissolution of the fraternity, though he clearly states, albeit confusingly, "I am in no way passing criticism on the question either of disbanding or continuing the fraternity." One wonders if his strong opposition to the dissolution of KGX was because his younger son, Francis, had not yet entered Bard and therefore had not yet had the opportunity to take part in the society. The controversy arose when, even after Whitcomb's decision to declare the vote null, a story was published in the college paper, The Bardian, recounting the fraternity brothers' vote to disband.

What is important to draw from the documents exchanged is that the majority of members wanted to disband KGX because they felt that "fraternities [were] conflicting more and more with the educational and social aims of Bard College." This same group of students hoped that their initiative to dissolve the fraternity would inspire the two other fraternities on campus to follow the same path with the same understanding. The only problem with this particular group's attempt was the timing. The college was not ready to end this tradition. It took another seven years for fraternities to be completely eliminated from Bard College Campus.