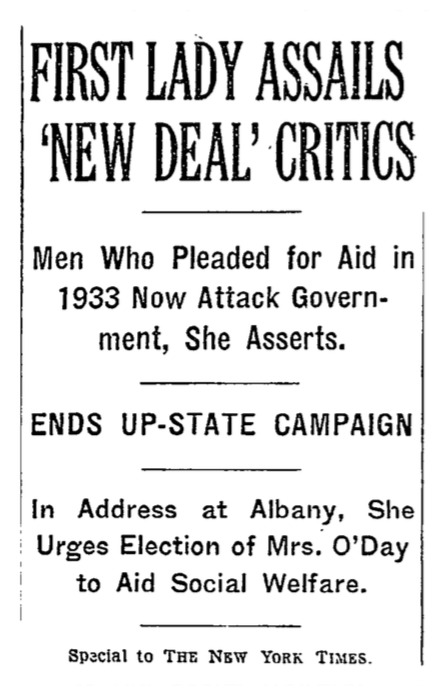 On October 26, 1934, Mrs. Roosevelt spoke for an audience of three hundred at a dinner in Albany. In support of Mrs. Caroline O’Day’s campaign for Congress, Mrs. Roosevelt declared, “if you send her to Washington… you will have some one there prepared to act on questions of social welfare, unemployment insurance and old age security.”
Eleanor Roosevelt’s October 26 address followed a two-year string of unabashed advocacy for short-term relief and long-term welfare reform. Only the day before, at a speech in Buffalo for the League of Women Voters, Mrs. Roosevelt posed a question for critics of relief spending: “Are you going to stop feeding the hungry?”
Two years into the Presidency, she transformed her role as First Lady and set the tone for the rest of her time in the position. Of course, her deeply-held desire for a more just society should have come as no surprise to anyone who read her book, It’s Up to the Women.
Published during her first year in the White House, It’s Up to the Women served as a sort of manifesto for the role that women could take in the betterment of society.

The author of twenty-eight books, hundreds of articles, and over two thousand columns, Mrs. Roosevelt made her beliefs and ideas easily available for public consumption. In the timeline above, Mrs. Roosevelt’s published books are each represented by an asterisk. Click on the timeline for a list of her works, available at the GWU Eleanor Roosevelt Papers Project.

Mrs. Roosevelt engaged actively and directly with the public through her long-running question and answer columns. These recurring columns first appeared in the Democratic Digest and, after 1941, in the Ladies’ Home Journal. She responded to questions ranging from family life to public policy in a uniquely concise and honest manner. Naturally, her audience and readership soared. Mrs. Roosevelt responds to questions posed by readers of the Democratic Digest in 1938. In this typical column, ER tackled four controversial and contested topics: the Social Security Act, the Fair Labor Standards Act, unemployment relief, and the role of women in Congress.

← Where do we want to see our country?
Engaged, Enthusiastic, Audiences →
A Redefined Public Role