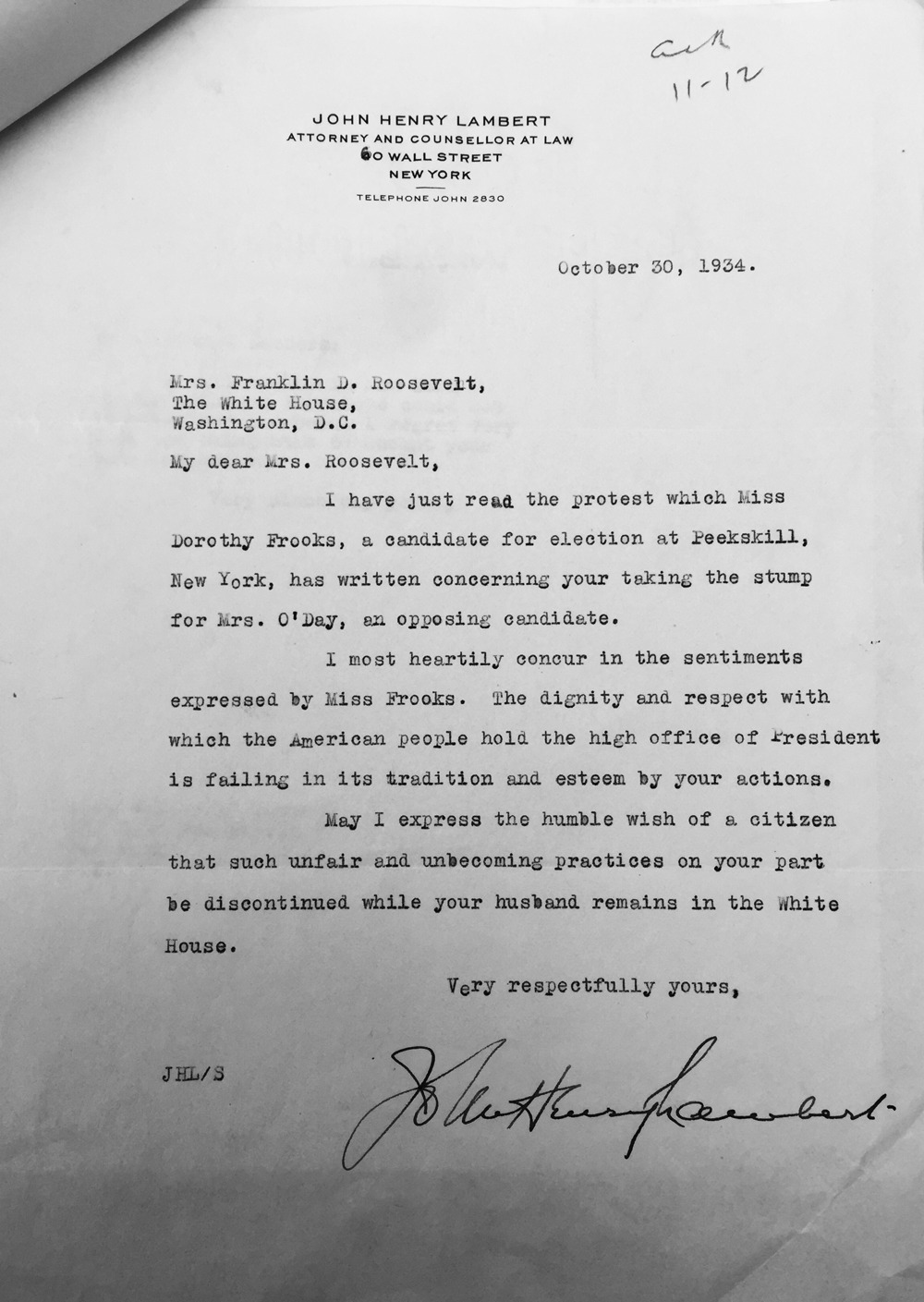 Mrs. Roosevelt was often criticized for the public role she played in advocating for social reform. Even members of the public felt no qualms criticizing her by mail.

A New York City attorney, John Henry Lambert, wrote to Mrs. Roosevelt on October 30, 1934, regarding her speech in public support of Mrs. O’Day:

“The dignity and respect with which the American people hold the high office of President is failing in its tradition and esteem by your actions."
-John Henry Lambert to ER, October 30, 1934

But, Mrs. Roosevelt seemed often unmoved by the attacks against her and her character. She personally responded to Mr. Lambert's letter. In an unapologetic one sentence response, ER informed Mr. Lambert that she was an individual actor. Although not explicitly mentioned, ER's response seems to have underscored that her public role was not defined by that of her husband.
"I too must live up to what I think is right." Although much of the criticism that Mrs. Roosevelt faced was due to idealogical differences, some critics plainly premised their attacks on gender. In 1933, Mrs. Roosevelt’s travels across the country were a recurring news topic. That same year, a New Yorker cartoon satirically depicted Mrs. Roosevelt visiting a coal mine. The cartoon was in seeming critique of Mrs. Roosevelt's wide-eyed eagerness to travel and examine social conditions. Published on June 03, 1933. From The New Yorker Collection/The Cartoon Bank.

The New Yorker cartoon poked fun at Mrs. Roosevelt by depicting her at a location considered unusual and unsuitable for a First Lady. Two years later, ER shattered both those value judgements by visiting a real coal mine.

After visiting the coal mine, she published a thoughtful editorial in The Saturday Evening Post on August 24, 1935. In the editorial, Mrs. Roosevelt argued that curiosity is a condition essential to humanity and she pointed at the absurdity of forcing insularity upon those eager to engage with the broader world.

"In strange and subtle ways, it was indicated to me that I should feel somewhat ashamed of that cartoon, and there certainly was something the matter with a woman who wanted to see so much and to know so much."

Mrs. Roosevelt was unafraid to tackle critics head-on. She artfully defended her advocacy work against even elected officials. In the letter below, Mrs. Roosevelt responds to Homer Holt, the Governor of West Virginia. Mr. Holt was displeased to learn that ER wrote about degrading working conditions in parts of his state. Mrs. Roosevelt’s liberal ideology and her broad public support irked some public officials. In the context of the Red Scare, she was even considered a threat. Her loudest critics were quick to denounce her as an un-American communist.

J. Edgar Hoover, a controversial figure who served as Director of the FBI for thirty-seven years, was so suspicious of Mrs. Roosevelt that the Bureau, under his leadership, closely spied on her. Mrs. Roosevelt’s FBI file remains one of the largest ever amassed by the FBI. Her travels, speeches, phone calls, correspondence, and articles were all of interest and were closely monitored.

The memo below, dated July 7, 1943, highlights not only how closely they monitored her activities, but the profound insignificance of the intelligence gathered. The memo below, addressed to Hoover, provides only one update: Mrs. Roosevelt is in Nevada. For more documents, click here to visit the FBI's online archive of ER files.