What Is American Romanticism? 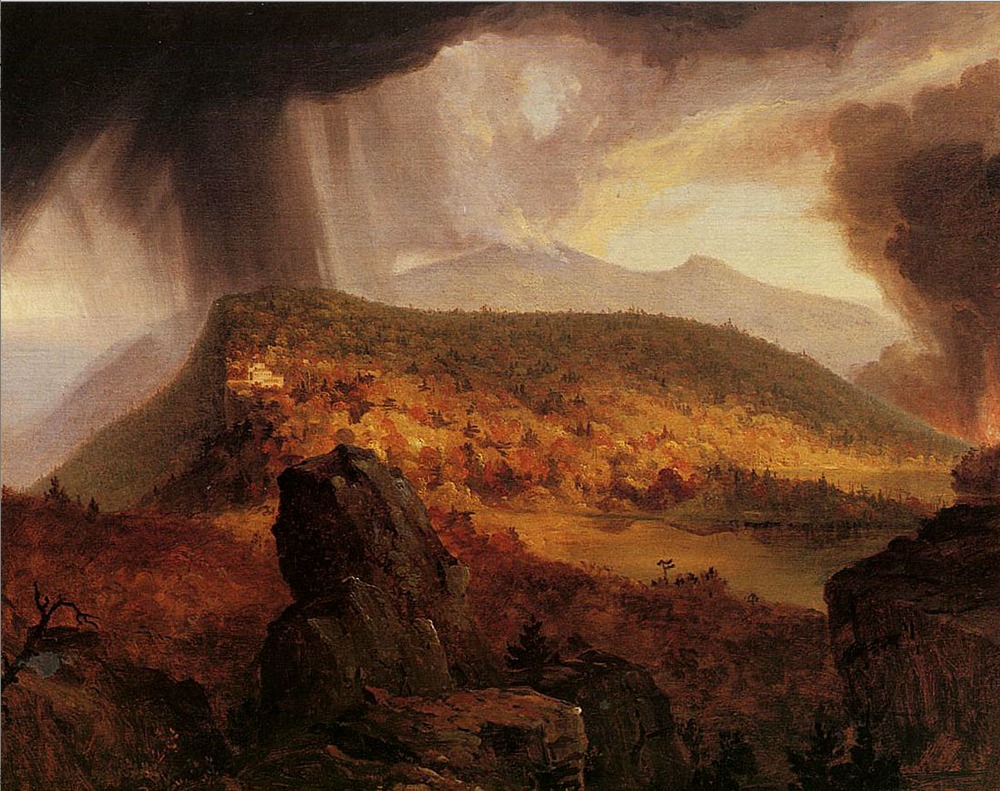 "Catskill Mountain House: The Four Elements" (1843-4) by Thomas Cole. Cole was part of the Hudson River School of landscape painters. This painting is a sublime depiction of the Catskills: The massive, dark storm clouds and plumes of smoke contrast sharply with the bright colors of the autumn leaves to inspire awe in the viewer. 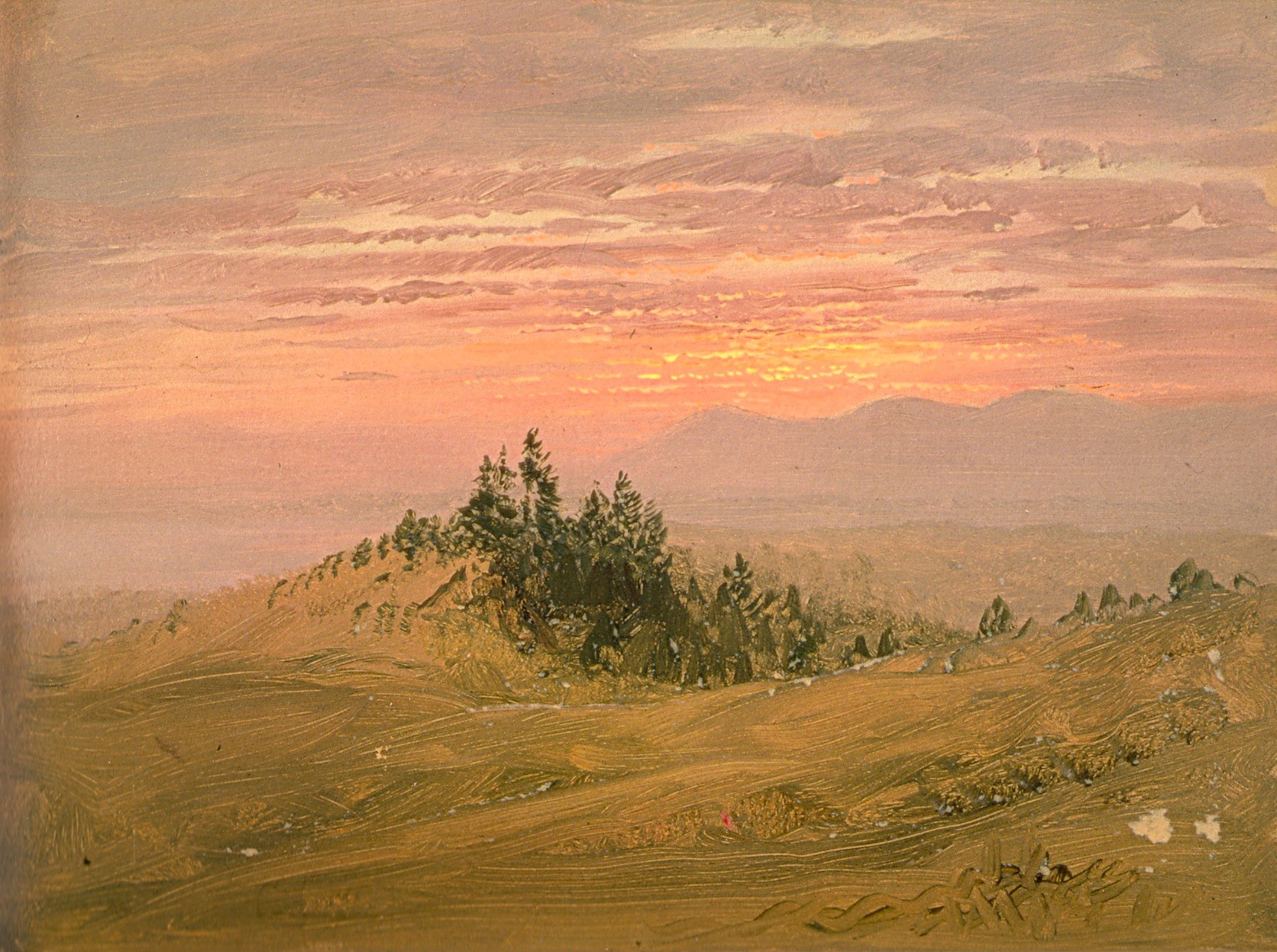 "Sunset & Catskills from Church Hill, Olana" (1870-72) by Frederic Edwin Church. This painting is a depiction of the picturesqueness of the Catskills. As opposed to sublimity, picturesqueness is characterized by inconsistency and roughness, and is meant to elicit subdued emotional reactions. Notice the inconsistent tree line and the rough, undulating hills, as well as the variety of colors used to depict the sunset. 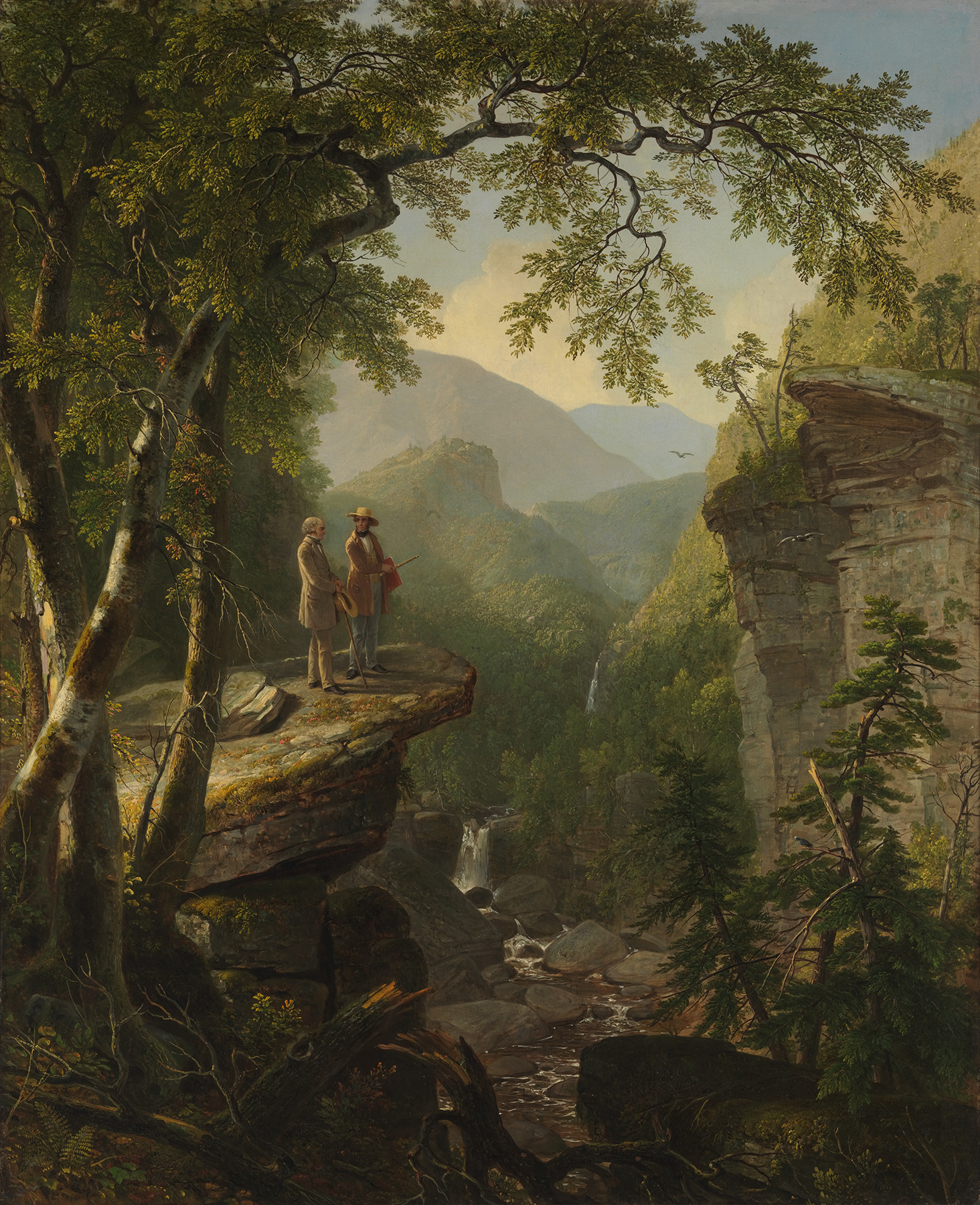 "Kindred Spirits" (1849) by Asher B Durand. Depicting fellow painter Thomas Cole standing with William Cullen Bryant in the Catskills, this painting evokes passionate emotions with a massive gorge and waterfall, with mountains in the distance. It utilizes people in the image to create a sense of scale and to emphasive the grandness of the Hudson Valley. 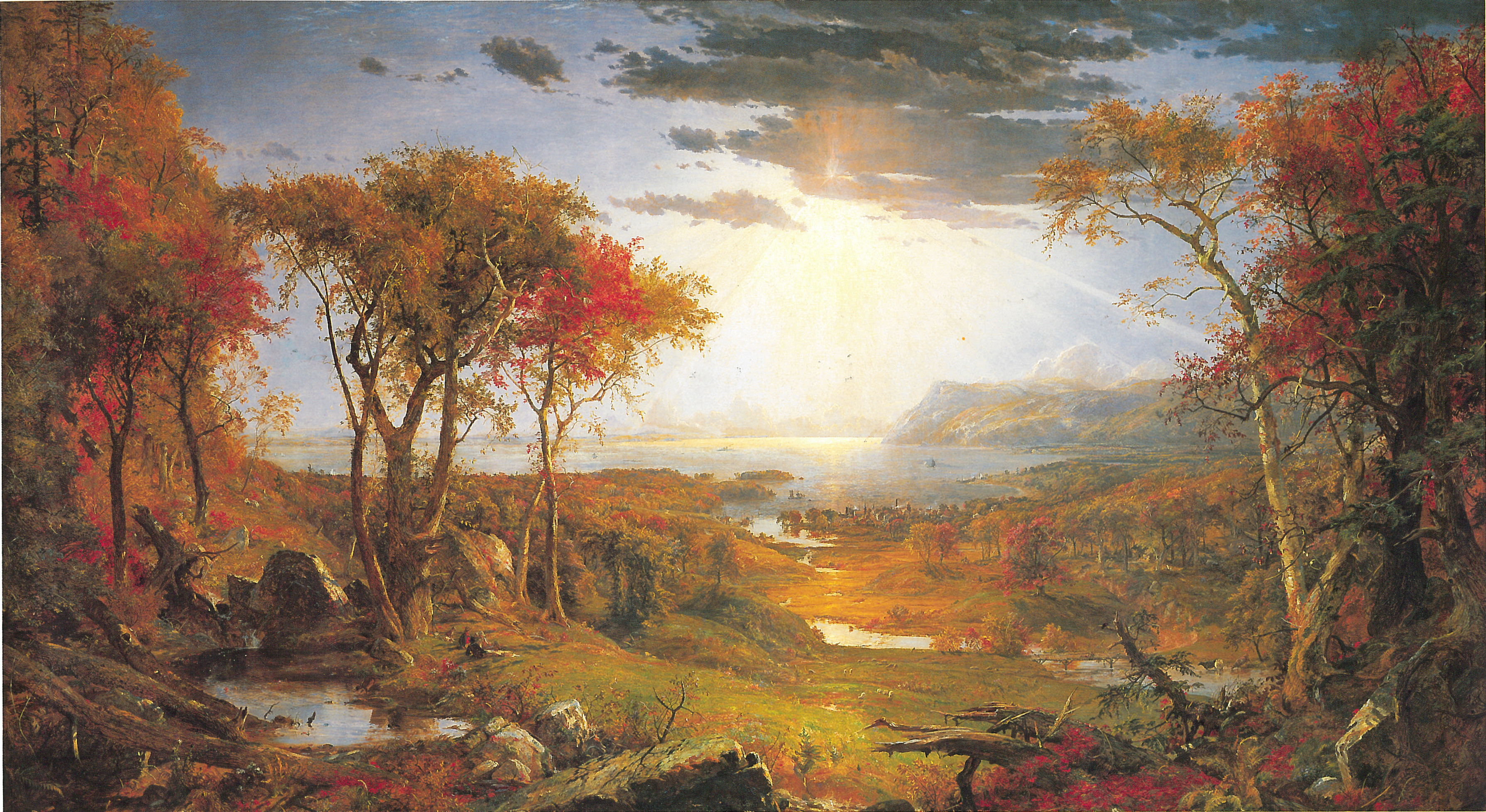 "Autumn--On the Hudson River" (1860) by Jasper Francis Cropsey. Cropsey was also a part of the Hudson River School, and this oil painting could arguably be a depiction of sublimity or picturesqueness. The contrast of the bright sun erupting from the dark clouds and illuminating the scene is certainly emblematic of sublimity, but the subtle variation of the tree leaves and rolling hills is very much picturesque.

A discourse on Romanticism might appear to be out of place when discussing American history. The philosophy is neither American in origin, nor is traditionally associated with the country. Romanticism was a philosophical movement from the early nineteenth century that “arose among European intellectuals such as Johann Goethe and Thomas Carlyle” that sought to idealize the natural world amidst a rapidly industrializing continent. Europe was in the midst of an economic system that encouraged the growth of urban centers and factories, and Romantics, who included artists, writers, and philosophers, looked to idealize and portray the beauty of a natural world that seemed to be on the verge of destruction from industrial capitalism.

In the United States, Romanticism was similarly born out of a desire to preserve the beauty of a pristine, wondrous North American continent before its natural resources succumbed to the exploitation and destruction that was inherent to sustaining country’s capitalist economy. However, artists and elites additionally repurposed Romanticism as an expression of American pride and superiority. Without the vast legacy of artistic and sociopolitical achievements that Europe appropriated for nationalistic pride, Americans looked to the one thing the Continent lacked – the promise of a limitless natural environment on a vast scale – to create a sense of patriotism for the up-and-coming nation.

Romanticism’s philosophy encompasses two distinct concepts of natural beauty: sublimity and picturesqueness.  Sublimity refers to the landscape’s ability to overwhelm the body with emotion by reflecting nature’s violence and terror, to  “excite a vision of the Divine Creation.” In contrast, picturesqueness embodies the landscape’s subtlety and roughness, referring to its inconsistency and variation “in color and shading.” From the late 1700s to the early 1800s, European writers and travelers looked for qualities of sublimity and picturesqueness when looking at the natural world. As these concepts were worked into mainstream European landscape theory, writers began to describe the American landscape with romanticized terminology, with attention specifically paid to the Hudson Valley

In the early 1800s, Romanticism became worked into mainstream American culture, deviating from its European roots and appropriated to bolster the new country’s sense of national pride. “Artists and newspaper editors” wrote to the American public and urged them “to dwell upon the richness and uniqueness of the Hudson.”  Ralph Waldo Emerson postulated that the vastness of America’s landscape needed to be appreciated for its beauty just as much as it was appreciated for economic development, and that the populace must “appreciate the beauty in nature” so development could coexist with nature. Author and socialist Albert Brisbane wrote that Americans needed to look to nature for intellectual growth and inspiration that was being stifled in factories, where “strength of body and mind, the desire for any intellectual pursuit…is gone.”

Beginning in 1825, scenic areas in the northeastern United States experienced increased tourism, as “an awareness of the aesthetic value of natural landscape…bloomed” and resorts and estates were developed. To paraphrase a foreign traveler in 1847, “the Hudson…had become the focal point not only of national historical and commercial pride, but of poetic and literary achievement as well.” Beginning in the 1820s, the Hudson River School of painting attracted landscape artists like Thomas Cole, Asher Brown Durand, and Frederic Church to the Hudson Valley to capture sublimity and picturesqueness in paintings that, to this day, exemplify the region. These painters were supported by a cultural elite from New York and the surrounding area, because of “their strivings for cultural nationalism and an air of intellectual cosmopolitanism.”

Beyond just these motivations, Romanticism’s hold in America and the Hudson Valley was rooted in an anxiety about the incoming dangers of economic development and industrialization. From 1825 to the Civil War, “territorial annexation…proliferation of the steamboat, and the rapid growth of cityscapes” were rampant, and there was fear that all the unlimited growth and vice of New York City would extend into the Hudson Valley, exemplified in the Hudson Valley routeway and the Erie Canal.

American writers and painters of the Romantic era were pessimistic about Manifest Destiny’s all-consuming march towards the West, and later, the growth and industrialization of Mid-Atlantic cities. Writers like William Gilpin and Walt Whitman waxed poetic about the “course of Empire” that was causing the vice-ridden and ugly cities to unsustainably sprawl towards the countryside. The Hudson River School’s beautiful paintings must be understood in the context of a pre-Civil War era of massive “territorial annexation…and national aggrandizement.” Thomas Cole’s bucolic and grandiose characterizations of rural environments were meant to contrast with his resentment and pessimism towards the evils associated with New York City and its attendant developments. We will see later that these same anxieties about the spread of human development and economic growth continued to be felt in the Hudson Valley well past the 1800s and into the twentieth century, spurring attempts to romanticize both the past and the natural landscape to quell these fears.

Romanticism's Influence on Architecture →
What Is American Romanticism?