Nancy Cook was born in New York, NY in 1884. She attended Syracuse University where she was active in student politics and activism for various causes: suffrage, protective labor legislation for women, abolishment of child labor, and world peace. In 1912, Cook graduated and moved to Fulton, NY where she taught art to high school students until 1918. It was here that Cook became close to her old college friend and ultimately her life partner, Dickerman. Cook and Dickerman traveled with the Red Cross during the first World War and upon returning home Cook ran Dickerman’s campaign for the State Assembly. Although ultimately Dickerman failed, Cook’s organizational skills and successful campaigning stood out and got her a position working for Harriet Hay Mills, Chair of the Women’s Division of the New York Democratic Party. She became the Executive Secretary for the Women’s Division and held the position for 19 years. Cook’s fundraising and campaigning abilities became well known and in 1922 she received a call from Roosevelt requesting assistance with a fundraiser for the Women’s Division. After planning the event together, Roosevelt and Cook became close and through this friendship Roosevelt was introduced to Dickerman. Cook helped run FDR’s gubernatorial and presidential campaigns through her connections with Roosevelt but once FDR was elected as President, Cook and Roosevelt’s friendship simmered. In 1936 with the closing of Val-kill Industries, Cook and Dickerman began to separate themselves from Roosevelt. In the summer of 1938, while Dickerman was oversees, Roosevelt and Cook got into a large argument that neither has ever divulged the details of. Ultimately this argument ended their friendship and once Cook had sold her interest in Vall-kill to Roosevelt, she retired to Connecticut where she lived with Dickerman and died in 1962.

Mary Williams (Molly) Dewson was born in Quincy, Massachusetts in 1974. She attended Wellesley and studied social work until her graduation in 1897. After moving to Boston, Dewson began working as the secretary for the Domestic Reform Committee of the Women’s Educational and Industrial Union in Boston where she conducted statistical studies of women’s roles in the home. This led to a position teaching women household skills in Boston school for housekeeping. In 1900 Dewson left her position to set up the parole department of the Massachusetts State Industrial School for Girls and became the superintendent of a school that worked on the rehabilitation of delinquent girls. Dewson continued her work with various labor organizations and committees for the next ten years and in 1911 she was named as the executive secretary of the Minimum Wage Investigation Committee where she was integral to the creation of the first minimum wage law. After spending two years with her life partner at a farm in Massachusetts, Dewson reentered the activism world by becoming a Suffragette in 1915. The war saw a change in her priorities and she flew to France with the Red Cross to work as a nurse until the end of the war. Upon returning home, Dewson was given the position of principal assistant to Florence Kelley in the National Consumers’ League. By 1925 she had worked her way up to president of the New York Consumers’ League and remained in that position until 1931. It was during her work with the Consumers’ League that Dewson began working with Eleanor Roosevelt. Their first large project together was co-leading lobby efforts of the Women’s Joint Legislative Conference. Roosevelt began to entrust larger tasks to Dewson, including organizing women’s groups to support Al Smith and later to support FDR. Following FDR’s election, Dewson was named president of the Democratic National Committee’s Women’s Division. FDR’s nickname for Dewson was “the little general” due to her ability to force results and the intensity of her drive. During her time as president of the DNCWD, Dewson procured more government jobs for party members than anyone had ever done in the past; she also created the Reporter Plan which educated female party members and voters on New Deal programs. In 1937, after a short stint on the Social Security Board, Dewson was forced to step down from all government work due to illness. She moved to Maine and continued work in politics as the vice-president of the Maine Democratic Advisory Committee. Her friendship with Eleanor Roosevelt continued through letter correspondence and visits until Dewson’s death in 1962.

Marion Dickerman was born in Westfield, NY in 1890. She studied at Wellesley before transferring to Syracuse where she met Nancy Cook who later became her life partner. While at Syracuse Dickerman was a supporter of suffrage and campaigned for legislation protecting women and children in labor. After earning her graduate degree in 1912 she moved to Fulton, New York to teach American History. It was in Fulton that Dickerman became reacquainted with Cook and the two worked for Red Cross and the Liberty Loan drive during the World War. In 1919 Dickerman was chosen by the Joint Legislative Committee to run against Thaddeus Sweet for speaker of the New York State Assembly. It was widely known, even to Dickerman, that she was not going to win but she ultimately achieved the goal which was to steal enough votes away from Sweet as to prevent him from having a gubernatorial position. Dickerman continued her career in education and in 1921 became the dean of the New Jersey State College and taught courses at Bryn Mawr’s Summer School for Women Workers. In 1922 Dickerman got a job working at the Todhunter school. June of that same year she was taken by Cook to Hyde Park where she met Roosevelt for the first time. Their friendship and partnership grew as they both worked closely through the Women’s Trade Union League, League of Women Voter, and Democratic National Committee. Dickerman, Cook, and Roosevelt maintained a very tight bond due to similar interests in political and social matters and in 1927 the three women purchased Val-kill where they built a residence and opened Val-kill Industries. Through Roosevelt, Dickerman became closely acquainted with FDR and by 1933 she openly favored her partnership with the President over his wife. Many of Roosevelt’s friend expressed disapproval about Dickerman in various correspondences. In 1936 Val-kill Industries closed and Dickerman’s friendship with Roosevelt began to dissolve. Roosevelt refused to grant a loan for the expansion of the Todhunter School due to the bad economy and subsequent arguments broke out between she and Dickerman. In 1938, FDR named Dickerman to the Presiden’s Commission to study international relations in great Britain and Sweden; while oversees Dickerman’s friendship with Roosevelt came to an end although Dickerman remained close to FDR until the end of his life. Upon returning home Dickerman remained active in politics and became an alternate delegate to the Democratic Convention. Following FDR’s death, Dickerman and Cook moved to Connecticut and Dickerman remained quiet in the political sphere until her death in 1983. 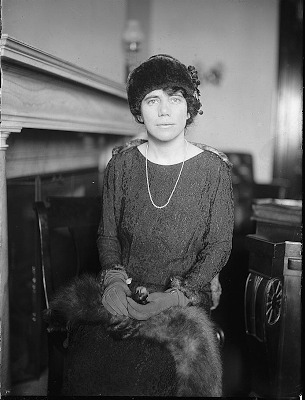 Esther Lape poses for a portrait

Esther Lape was born in Wilmington, Delaware in 1881. She attended Wellesley and following graduation taught English at Swathmore College, University of Arizona, and Barnard College. Lape was active in women’s rights from the beginning and was one of the founding members of the League of Women Voters. Her friendship with Roosevelt did not form until they were introduced through her partner, Elizabeth Read, in 1920. In 1923 Roosevelt and Lape administered the competitions for the Bok peace Prize, which was ultimately investigated by the federal government and claimed to be “a tool of foreign government and institutes”. Roosevelt and Lape were tried in court but upon the death of President Wilson the charges were dropped. Lape and Roosevelt met regularly to work on policies regarding Social Security and spent much of their friendship discussing the importance of the United State’s relationship with Soviet Union (this is documented in many letters). Following World War II, Lape became a public advocate for improved healthcare in America. In 1965 Lape addressed the Nobel Committee, proposing that Roosevelt be awarded the Nobel Peace Prize posthumously but her argument failed and the prize was awarded to UNICEF that year. Lape was an important source for one of the main biographies of Roosevelt by Lash. She died in 1981 making her one of the longest living close friends of Eleanor Roosevelt. 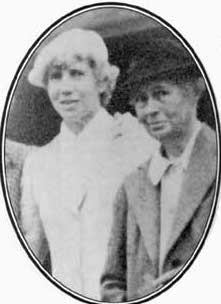 Elizabeth Read was born in New Brighton, Pennsylvania in 1872. She attended Smith and earned her Law Degree from the University of Pennsylvania Law School. Read was an active Suffragette and throughout the war led campaigns and marches in favor of suffrage. She lived in New York with her life partner, Esther Lape, and worked for the state branch of the League of Women Voters. It was through the league that Read and Roosevelt became aquatinted and began a friendship that would last for their rest of Read’s life- one of the closest friendships in Roosevelt’s life. In 1920 Roosevelt became the director of the league’s National Legislation Committee and began to spend time at Read and Lape’s apartment in the city. Roosevelt has refereed to Read as playing an important role in her education as a political activist. Roosevelt hired Read to be her attorney and financial advisor until FDR’s election to office. Read and Roosevelt continued to work together, along with Lape, to encourage American participation in the World Court. Until Read’s death in 1943, Roosevelt spent long visits at her country home called “Salt Meadow” and even purchased an apartment in the same building to spend more time together. 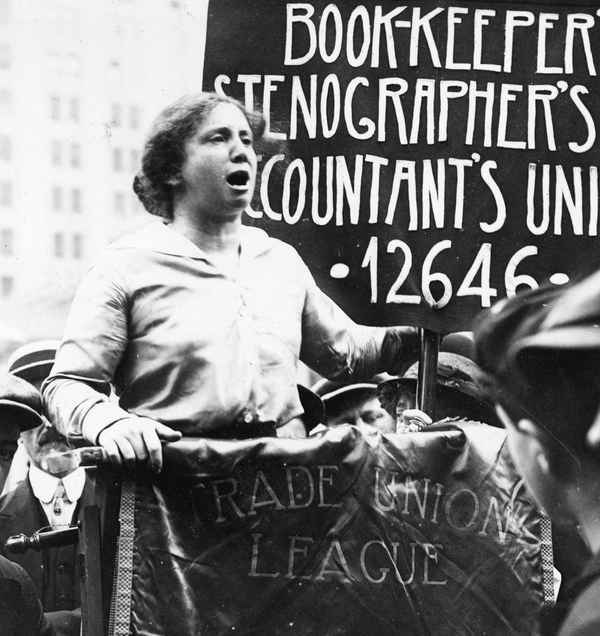 Rose Schneiderman at WTUL rally in 1910.

Rose Schneiderman was born in Russian Poland is 1882 to a poverty stricken family. Hoping to find better opportunities in the United States, Schneiderman’s family immigrated to New York City in 1890. Just a few years after arriving in America thirteen year old Schneiderman’s father died and the family’s situation worsened, forcing her to drop out of school and begin work in the garment industry. In 1903 she organized her first union shop, the Jewish Socialist United Cloth Hat and Cap Makers’ Union, and began to lead strikes against the dangerous conditions of factories. It was in 1907 that Schneiderman began her involvement with the organization that she claimed to be “the most important influence on her life” and one that led her to working closely with Eleanor Roosevelt: the Women’s Trade Union League (WTUL). Only months after beginning her work with the League she was elected vice president of the New York chapter. Following the tragic Triangle Shirtwaist Factory fire, Schneiderman founded the International Ladies Garment Workers Union but became frustrated with the male union officials refusing to properly address female labor issues. Following World War I, Schneiderman was elected the National President for the WTUL and began lobbying for eight hour work days and minimum wage for women. In an effort to provide better opportunities for education she organized the Bryn Mawr Summer School for Women Workers in 1921. The following year Schneiderman met Eleanor Roosevelt through the WTUL, beginning a life-long friendship and partnership. Schneiderman took Roosevelt under her wing and met with her often to explain various women’s labor issues and methods that the league was using to remedy them. She then appointed Roosevelt as chair of the financial committee in hopes that her public influence could boost the priorities of the league in Washington. Schneiderman’s friendship with Roosevelt led to a professional relationship with FDR and he admired her work ethic and ability to make change. In 1933 FDR formed the National Recovery Administration (NRA) and named Schneiderman a member of the advisory board, which was a position she held until the disbandment of the NRA in 1935. After leaving the NRA Schneiderman returned to her position as President of the WTUL and held that position until 1950 when the WTUL dissolved. Schneiderman continued her work lobbying for women’s labor rights and her friendship with Roosevelt until her death in 1962. 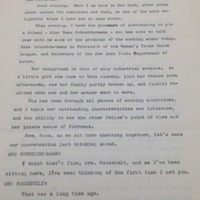 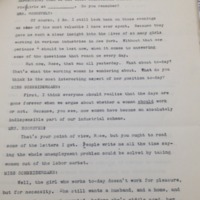 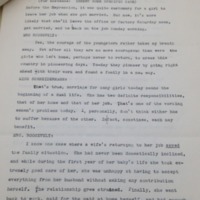 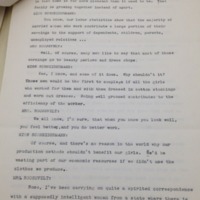 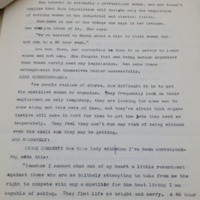 A portion of a transcript of a radio interview between Eleanor Roosevelt and Rose Schneiderman in May of 1937. 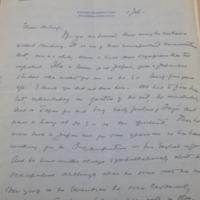 A letter from Esther Lape to Eleanor Roosevelt.