In the seventeenth century when provincial New York was under Dutch control, it was not uncommon for elite women to be well educated and highly involved in business. Businessmen in this area would often partner with their wives and allow them to handle contracts and other affairs while they were away dealing with clients.

The Dutch legal tradition that ruled colonial New York opened doors for elite married women, like Alida Schuyler Livingston, to be such a large part of their own businesses or partner with their husband. This started to change in 1664 after the British takeover and with the enforcement of English common law. Under the Crown, women were not permitted to own property or sign binding contracts. Thus, women were denied their previous legal identities.

This new set of laws forced many women to rely on their husbands or sons. Some outstanding women did not give up the roles they played prior to the enforcement of English common law. They worked around the restrictions that were now in place, like the requirement of a man’s signature to be on all formal contracts, to continue working in the world of business. One of these extraordinary women was Alida Schuyler Livingston. 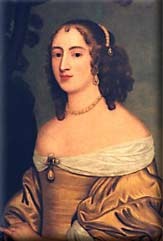 Alida Schuyler Livingston, the daughter of Philip Pieterse and Margarita Van Slichtenhorst Schuyler, was born into one of Albany’s foremost fur trading families in 1656. It is likely that Alida learned the business of the fur trade from her mother and would later apply her education to aid her husband in his own business ventures. At the young age of nineteen, she married Nicholas Van Rensselaer. The two of them did not have any children and he died in 1678, just three years after their marriage. Less than a year later, Alida remarried to Robert Livingston, Van Rensselaer’s former bookkeeper. With Robert, Alida gave birth to nine children. Alida’s background as a member of one of the most prominent families in Albany supplied Robert with many political and commercial connections that would have otherwise taken years to form.

Robert Livingston was a businessman who frequently left their home in Albany to deal with affairs. While he was gone, Alida took charge of his Albany operations. The two corresponded through letters about business matters to confirm that everything was handled correctly. There are over 200 letters concerning business that Alida wrote to her husband, Robert Livingston that still survive today.

In her husband’s absence, Alida was not only in charge of business affairs, but also maintained their household. When the couple moved south from Albany to Livingston Manor on the Hudson River, Alida supervised the extensive industrial and agricultural operations at their manor whenever Robert was gone. Alida’s responsibilities stretched beyond business, and into those of an elite woman of the area. Their household, like many in colonial New York, employed enslaved laborers and Alida was in charge of their duties. She oversaw their chores to make sure that the estate was kept in maximum condition. Alida also had to see to the care and the entertainment of her nine children. Between handling the family business, the family household, and the family, Alida was kept very busy.

The letters between Alida and Robert suggest that business absorbed much of her time and that she took it very seriously. Robert’s letters show that he greatly appreciated her hard work and devotion for the family business. Besides handling affairs while her husband was gone, Alida also advised him on any trades or offers that he received. She played a large role in advising his affairs and she was not above upbraiding him for his periodic foolishness, because he was occasionally distracted by his own political ambitions. He accepted both her criticisms and her business suggestions.

The legal limitations of the new laws neither determined the roles or functions of women nor forbade them from entering the world of business, which shows that there was a persistence of the Old Dutch ways. These laws did, though, make it difficult for women to be independent, as all legal functions were restricted to men. Despite this, Alida Schuyler Livingston continued to take business matters into her own hands. The Livingstons had strong political connections to the English Crown and in 1710, a division of Palatine refugees was settled on the land of Livingston Manor. These were about 1,200 of the 3,000 refugees that came over to the British colonies in that year and which was a substantial portion of the 850 families that settled in the Hudson River Valley. Alida worked hard over filling their contracts and just needed her husband’s signature to make it all legal. She also supervised the work that the Palatines did on their property: the milling of grain and bread baking.

After the Palatine corps venture failed, Alida worked on expanding Livingston Manor’s trading activities. From the time Alida and Robert established Livingston Manor on the Hudson River, the two of them developed the land to have a sawmill, a gristmill, a bakery, and a brewery. Alida was constantly heading new projects and kept up her involvement in the family business even with the restrictions that were in place under English rule.

As time went on, Dutch men in colonial New York gradually abandoned business partnerships with their wives and turned to solely consulting their own sons or male colleagues. This is not due to the change in laws, but to changes in society. During the eighteenth century elite women gradually stopped receiving commercial education and started to learn French and take dance and music lessons. Elite women began to assume the responsibilities of hospitality and sociability that were not as present in the previous generations. Alida Schuyler Livingston was not educated in this newfound appreciation of hospitality. It is said that if Robert would send unannounced guests to their manor, Alida would suggest alternate housing and then send them away, only to return to her work.

Alida Schuyler Livingston did not succumb to the pressures put on elite women during her adulthood to be sociable and genteel. She worked around the constraints that were put upon women under English common law to continue working in business. She oversaw workers and operations that were held on her property and was a main adviser to her husband. Business was a central part of Alida’s life and the social and legal pressures could not take that away from her.