During the nineteenth century there was a large increase in industrialization and urbanization. As a result America was being built up for functionality’s sake and a lot of its natural beauty was being destroyed. Along with this industrialization, products and materials that had previously been expensive, rare or labor-intensive became available to American families, such as textiles, which were traditionally woven by women in their homes.

Throughout the nineteenth century, women began to have smaller families and focused more on their children as developing individuals. Across all classes, child rearing was a time-consuming task that was conducted by the woman of the house—the mother. As America grew, both industrially and through westward expansion, women did not benefit. The law and society continued to discourage women from becoming individuals, but some continued to defy that pressure and pursued their own goals. 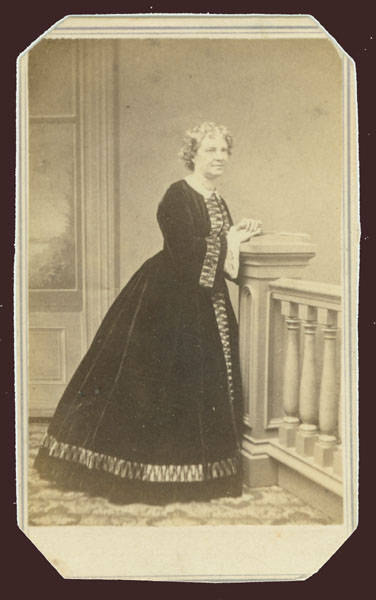 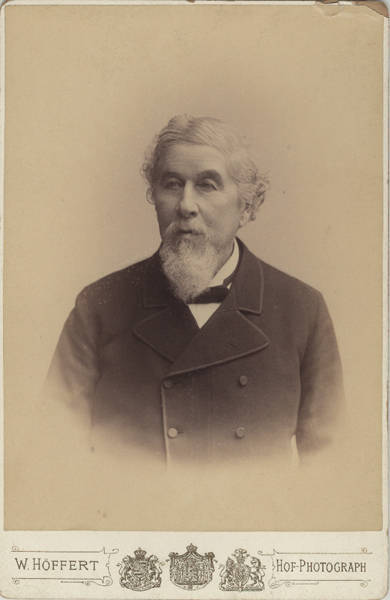 Margaret Taylor Johnston Bard and her husband, John Bard, lived in the Blithewood mansion, created by the Robert and Susan Donaldson, Alexander Jackson Davis and Andrew Jackson Downing. The Bards bought the mansion from the Donaldsons when they moved down the Hudson to Edgewater (built in the 1820’s) with their five children. When the Bards moved to Blithewood in 1853, Margaret renamed the property Annandale to honor her Scottish heritage. Within a year of owning the land, the two of them built Bard Hall. Bard Hall was the first place that Margaret instilled her passion for education. The building was used as a chapel, a Sunday school for local children, and a neighborhood parish school during the week.

Later, the Bards built a church next to Bard Hall. It was originally constructed in 1857 in thanks to God for the birth of their fourth child and only son, Willie Bard. Unfortunately the church burned down in 1858 in a fire and was uninsured. The Bards were committed to building a local church and started the construction of a new stone building in 1859. In 1868, a plaque was placed on the exterior of the Chapel of the Holy Innocents in memory of their son who died that same year.

The founding of Bard College, then St. Stephen’s, is commonly attributed to the men that helped build the school. These men are her husband, John Bard, John McVickar and Bishop Horatio Potter. These three men did play a large role in the founding of the College, but were not the only factors of its creation. Without Margaret, it is likely that the school would not have had such strong financial backing and would not have been up and running in 1860.

John Bard gained the majority of his wealth from the dowry he received in marrying Margaret. Margaret, though, was deeply involved in how her family money was spent in the creation of St. Stephen’s. She was an essential part of early decisions pertaining to the College and was the only female on the board of trustees and the executive board.

When the school opened its doors in 1860, it was an all-male institution. St. Stephen’s functioned as a training college for young men who aspired to become ministers in the Protestant Episcopal Church. Thus, it is likely that Margaret Bard was one of the very few women on campus, but she managed to hold her own and make a name for herself in a society of mostly males.

Margaret Bard passed away while traveling in Rome in 1875. It is evident that the members of St. Stephen’s College held her fondly in their hearts, for they erected a well in her honor. The well stands between Bard Hall and the Chapel of the Holy Innocents, inscribed with her name. The well is also carved with “I was thirsty and ye gave me drink.” This is thought of as a “Thank you” from the College’s members to Margaret Bard for her help in creating an educational institution that would quench their thirst for learning. 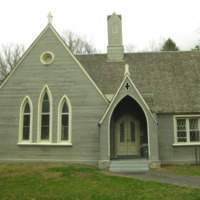 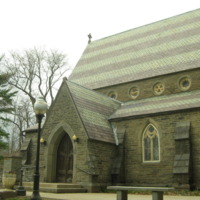 Chapel of the Holy Innocents 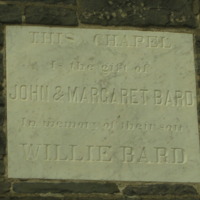 Plaque outside of the Chapel of the Holy Innocents 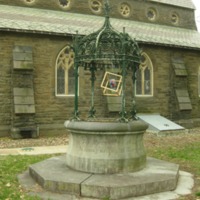 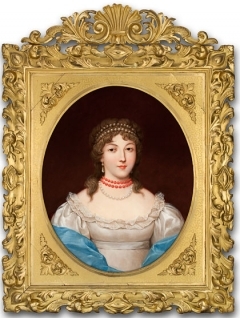 Louise Livingston lived at Montgomery Place after her husband, Edward Livingston, inherited the property in 1828 from his sister, Janet Livingston Montgomery. The couple, married in 1805, often traveled to New York from New Orleans to visit the countryside before Janet’s death.

In New Orleans, Edward worked in the steamboat business and was a politician. Through his political life, the couple became lifelong friends with Andrew Jackson. During Jackson’s presidency, Edward served as his Secretary of State (1831-33) and as the minister to France (1833-35). Edward considered his wife, Louise, to be his most trusted and confidential political advisor and the two of them came to be recognized as an “influential Washington power couple.” Louise would hold salons at their home, the Decatur House, in Washington D.C. so that politicians could meet in a non-partisan environment. Louise, like other women, was able to make an impact in the male-dominated political scene in Washington D.C. at the time. Her contribution was made by running these events and by being the primary adviser to her husband.

When Louise and Edward moved to Montgomery Place, Louise worked to transform the mansion and the grounds into a place of refined country life. Unfortunately, in 1836, Edward died. Louise then took over as head of the estate. When she gained this ownership, she moved all of the farming operations farther away from the mansion, to the outlying areas, to make room for more improvements closer to the mansion. The first full-scale project that she worked on was the construction of large gothic conservatory that would replace the greenhouse that Janet Livingston Montgomery had built. She started this project in 1840 and decided that it would be placed east of the mansion in a very prominent position. The design that Louise based the conservatory on was created by Frederick Catherwood and was made out of elaborate glass and wood.

She also planned additions to the original structure to complement its natural surroundings. Louise valued the environment she was in and wanted to create accessible ways to view and experience it. In addition to enjoying the natural landscape, Louise worked to construct elaborate gardens and an arboretum. She also worked on creating an extensive system of walking paths that extend to both the north and south ends of the property. She followed the ideas of Romantic design, where irregularity and spontaneity are key; to make a landscape look as if no human had touched it.

During her time at Montgomery Place, Louise enlisted Alexander Jackson Davis to help design the many structures she wanted built. Davis designed the north pavilion, which is an open porch on three sides, offered an enclosed wing on the south end (to balance the structure), and a porch running along the west side to look at the Hudson and the Catskill Mountains. Louise asked him to plan these additions so that the mansion could become unified with its natural surroundings.

As Louise’s daughter, Cora, grew older, she joined her mother in the planning of Montgomery Place. The two of them spent years reviewing the designs Davis made for work on the mansion. Mother and daughter would think up ideas and ask him to create a plan for them, but only some would be approved. They were very particular about what was to be built on their estate and wanted it all to be just right.

During the middle of the nineteenth century, Americans were starting to value the nature that surrounded them more and more. They stopped thinking of it as something that needed to be tamed and used for industrial purposes, but as something to cherish and preserve. This symbolized a major shift in Americans’ attitudes towards land.

One of Montgomery Place’s neighbors was John Church Cruger who had a milling operation on the Saw Kill Creek. In 1841, when he wanted to expand, Louise and her neighbors to the north, the Donaldsons at Blithewood, agreed to buy the land around the Saw Kill that runs between the two properties. They wanted to buy this land so John Cruger could no longer use it for his milling and alter the naturalness of the land. They also bought the land at the mouth of the Saw Kill and demolished the mill that was built there. This document of their purchase of Cruger’s land was the first of its kind; a written agreement to prevent natural land from being used for industrial use. It was an effort made to preserve the untouched nature in the area so that generations to come could enjoy it just as they had.

Through Louise’s time at Montgomery Place, she worked to build structures that would allow for the enjoyment of the natural environment. She played a large role in the transformation of the mansion into what it is today. In addition to creating areas for viewing nature, Louise made a project out of protecting the natural beauty of her surrounding environments so that generations to come could enjoy the wonders of what the land had to offer. In the remarks made at her funeral, Robert S. Hunt said, “She was most happy when she could promote the highest happiness of those about her. Great efforts were never great to her, nor trifles small, if they could augment the pleasure of her friends…true hospitality and genuine politeness can only spring from a loving heart.” 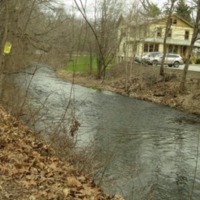 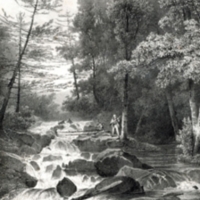 The lower falls of the Saw Kill 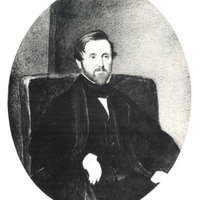 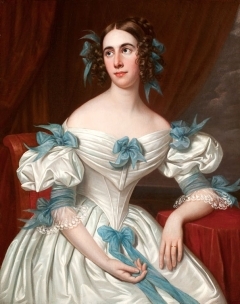 Cora Livingston Barton, born in 1806, was Louise and Edward Livingston’s only child. Cora and her husband, Thomas Barton, were extremely passionate about botany and gardening. The couple lived with Louise Livingston at Montgomery Place, which allowed the mother and daughter to continue working on the design of the estate. The two of them implemented many improvements and changes to the building and grounds that would last over thirty years.

Cora and Thomas inherited Montgomery Place when Louise died in 1860. Cora continued the work that her mother had started to preserve and enhance the natural beauty of the land. Two of her largest projects geared towards the appreciation of nature were the design of the east portico and the redesign of the porch on the western side of the mansion. These two projects were completed in 1863. Cora would send sketches and measurements to Davis so he could give his professional opinions and modifications. She would also work on her own designs, like a garden swing, and many other structures that had never before been seen in the United States.

Cora was particularly concerned with the creation of gardens and the addition of landscape features. Andrew Jackson Downing, one of Alexander’s partners, offered a plan for elaborate romantic gardens to surround the conservatory, but Cora stepped in to reduce the scale of his design. Andrew praised her creative impulses and in 1847 he devoted an entire article in his magazine, The Horticulturalist and Journal of Rural Art to Montgomery Place. It was not common for Andrew to pay such close attention to a specific estate.

Cora continued to work on the gardens and landscape design at Montgomery Place until her own death in 1873. Before her death Cora had asked her head gardener, Alexander Gilson, who had worked closely with her for several decades, to open the normally private estate to the public. She wanted them to experience the summer blossoming of her Agave americana, an enormous and ancient century plant that only flowers at the end its one hundred year life. Cora herself wanted to experience the flowering of this plant that had been passed down from Margaret Beekman Livingston to Janet Livingston Montgomery to Louise Livingston and lastly to her, Cora Livingston Barton. Unfortunately she died just a few months short of its blossoming.

Cora Livingston Barton worked closely with her mother, Louise, Alexander Jackson Davis, and Andrew Jackson Downing to modify the Montgomery Place estate. They worked in collaboration to create a mansion and landscape that would complement the natural surrounding beauty. Cora was extremely involved in these endeavors in desire of an estate that would permit the leisurely enjoyment. 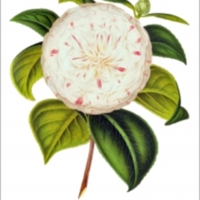 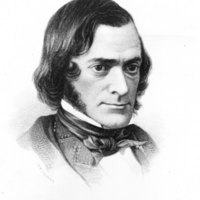 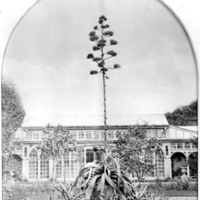