BLITHEWOOD IS POSSIBLY the most beautiful spot we have on campus. It is the place where the Bard community holds many special events, academic classes, group tours, seminars, and receptions. It is also where the local community comes to hike, recreate, and simply soak up the landscape and relax. Blithewood is Bard’s Central Park, an outdoor place for all ages to enjoy. Bard is fortunate to have such a valuable, beautiful and historic site to showcase and call its own. The house you see today was built by Captain Andrew C. Zabriskie (1853–1916) and his wife, Frances Hunter Zabriskie (d. 1951), who purchased the property in 1899. They commissioned Francis L. V. Hoppin (1867–1941), of the architectural firm Hoppin & Koen, to design a house and garden.

Blithewood Garden is a quintessentially architectural garden. Built during the Gilded Age (1870–1900), it follows the traditional Italianate design, with paths on geometric axes, symmetrical beds, a central water feature, statuary, marble ornaments, and walls that form an enclosure, creating a green “room.” The main axis of the sunken, rectangular garden and its terraces terminates at a pavilion overlooking the Hudson River. Hoppin wanted the walled garden to create a sense of solitude, a haven, for its owners. During an interview in 1903, Hoppin expressed his thoughts about the relationship between the house and garden, saying that both “are properly parts of a single design . . . rather than afterthoughts.” 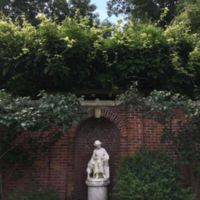 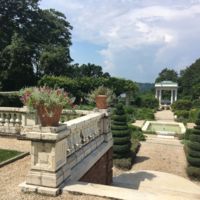 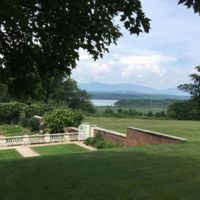 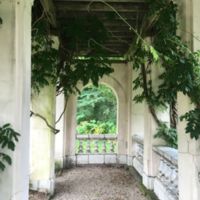